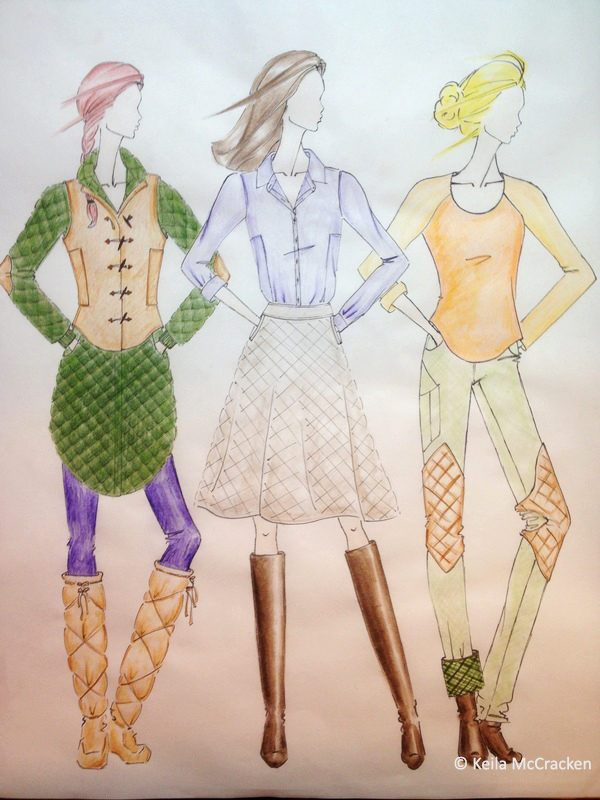 With a degree in environmental anthropology from Wagner College and three years of study at the Fashion Institute of Technology of New York, Keila McCracken’s goal is to bring her two worlds together. Strongly influenced by her values of environmental sustainability, social justice and economic resiliency, Keila plans to design clothing using fabric made from locally sourced materials and animals on Minnesota’s northern tier.

As with many students, the primary goal is to move away from home as soon as high school graduation is over. Ready for a change, Keila headed from her hometown of Bemidji to NYC to study Fashion Design at the Fashion Institute of Technology (FIT). I asked Keila if she experienced culture shock when she arrived in the big city and she says it was an easy adjustment for her but maybe not for them. Coming from a family who is involved with their community and cares about how their actions impact others, she began to ask questions of the fashion world. Questions that intruded on glittery ball gowns and the never ending pursuit of outward aesthetic perfection. What about the people who make the clothes? What is textile factory waste doing to the environment?  Feeling it was more important to resolve those priorities in her own mind; she took a year off, shifted gears and received an environmental anthropology degree from Wagner College. And, she earned a Sustainable Design Entrepreneurship certification from the newly launched program at FIT. Keila feels the certification was a perfect molding of both the ethical issues concerning sustainability for the economy, environment and communities and her fashion design background. 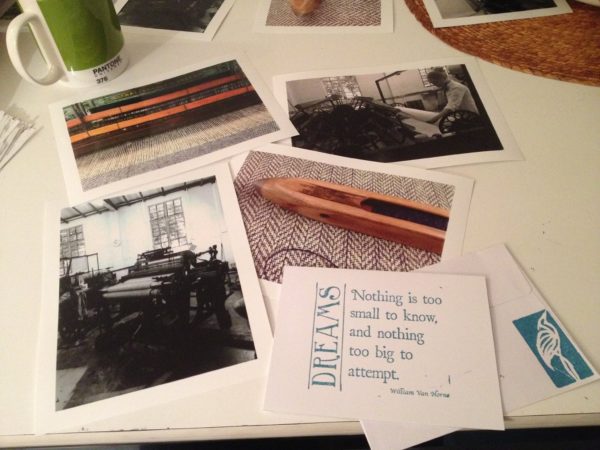 Keila’s awareness of how communities and cultures become more ecologically conscious opened her eyes to changes in her hometown community, too. She saw Bemidji making changes in the outward form of seven new community gardens, an organic farmer’s market, art installations on the corners of many downtown sidewalks and a shift in thinking to where people realize their decisions and choices are connected to everyone else. It is true, in a smaller community where it feels like everyone knows everyone; there is a higher sense of responsibility. 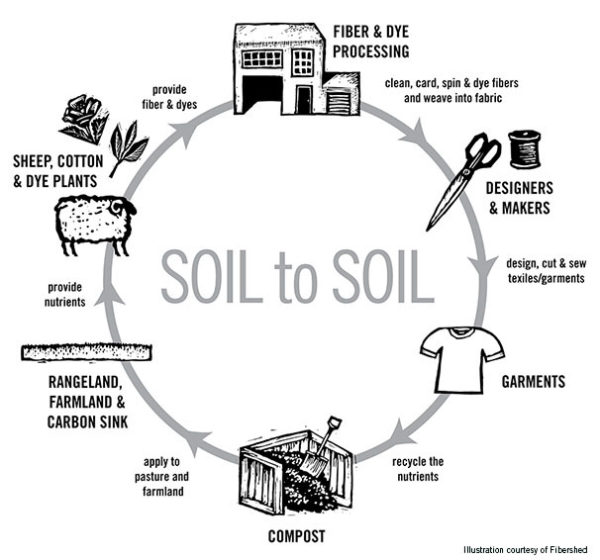 Fibershed cycle of production from animal to clothing to compost.

This is where Keila intends to step up in her local community.

Keila sees the progressive thinking of the Fibershed philosophy (see above graphic) as a critical link between developing agricultural methods for sustainable local farming and textile design. A Fibershed is sort of like a watershed, in that it’s a biologically connected area. Flora and fauna are somewhat unique to each Fibershed area, although there is a lot of cross over between regional areas. The central idea is to go with the flow of what grows there naturally and develop those strengths using sustainable practices. One of the first steps Keila took when back in Bemidji was to join the Fibershed movement by starting an affiliate group called Northern Fibershed. She reached out to local sheep farmers, wool dyers and the general fiber community.  Keila plans to use wool from locally raised sheep to make fabric for her designs. Being a northern Minnesota girl she spends the winter ice fishing, skiing and stoking the fire so she depends on wool to keep her warm and dry. Her design practice will source local materials for fabric and the needs of people who live in the local climate; which is backwards from the ‘blue-sky-anything-goes’ design process she was taught in school.  How will all this happen? 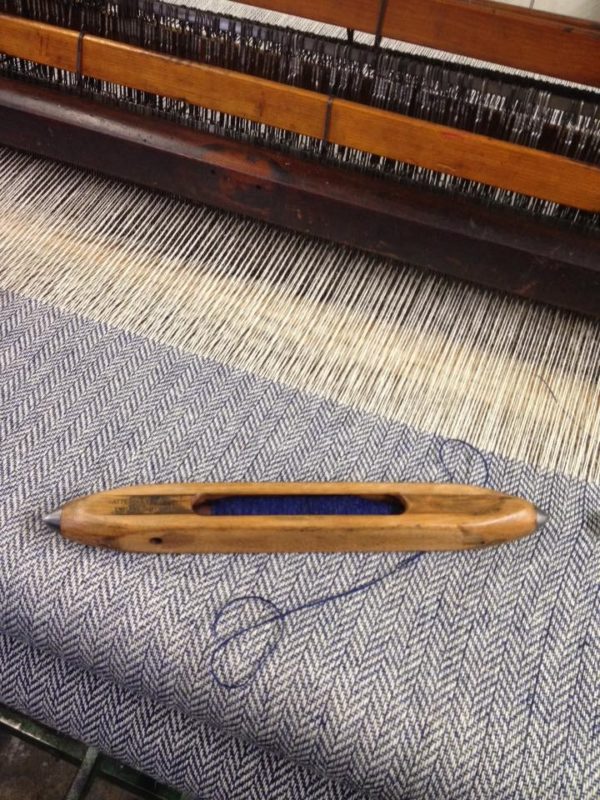 It’s no coincidence that a gal with Scottish roots would pick a loom and style of weaving cloth whose heritage is tied to a location where the workers, fabric, dye and are rooted in one small Scottish community. The islands of Harris and Lewis in the Hebrides off Scotland are famous for their weaving–known around the world as Harris Tweed. There is even an official authority and Parliamentary laws in the UK that protect its existence. www.harristweed.org For a large part of Harris Tweed’s history, croft weavers (home weavers) used the Hattersley Loom to produce the luxurious tweed. As demand for production increased, new larger looms were utilized lessening the need for the individual home loom. 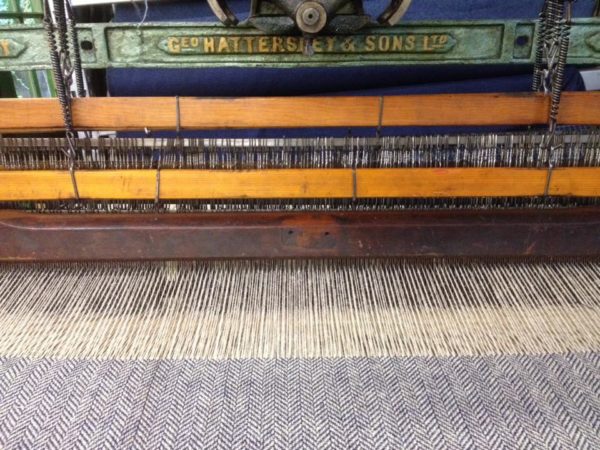 In May, 2015, Keila launched a Kickstarter campaign named “Hattersley Goes Stateside”.  Successful in her bid for investors, she traveled to the UK mid-summer to pick up her loom and get it ready for shipping to Bemidji. Keila’s Hattersley loom is set up for a European weave structure so while she was in London she learned how to weave cloth much the same way as the old croft weavers in Scotland. Now back in the US, Keila intends to design her own weaving style—one that reflects the northern fibershed with all its unique customs and quirks, right here in Minnesota. 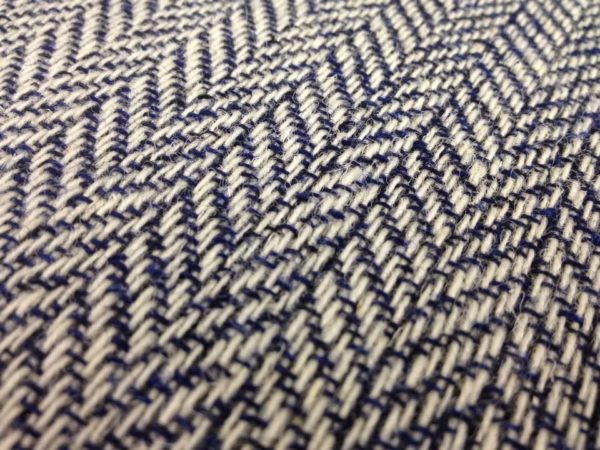 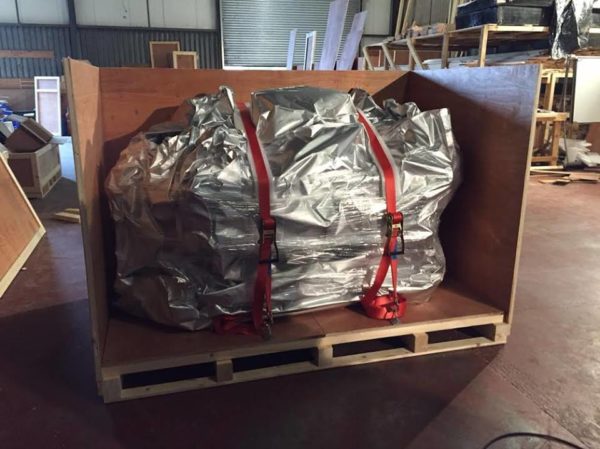 As of this writing, the Hattersley has completed its trek half way around the globe from Scotland to Bemidji, Minnesota!