By all accounts, Don Waalen-Radzevicius is having a great year. MinnesotaSticks, his knitting pattern and design business has really taken off giving him the opportunity for travel, teaching in shops across the United States and the opportunity to create pattern collections for two Midwestern yarn companies.

The name MinnesotaSticks obviously refers to his current location and the tools of his trade, but the names of his patterns and heart of his business reflect his rural Wisconsin roots. Don says the rural community and surrounding woods and fields spark memories that he translates into a design using yarn. Any kind of yarn—he loves them all and enjoys an excellent match between fiber and pattern. At five years old, his Grandmother got him ‘hooked’ on crochet and for the next thirty years Don spent many hours happily immersed in that craft. His attention turned to knitting when he was required to take a break because of the onset of work related carpal tunnel.  Healed up and feeling fidgety without a project to make with his hands, Don bought a “Learn to Knit” book and hasn’t looked back. 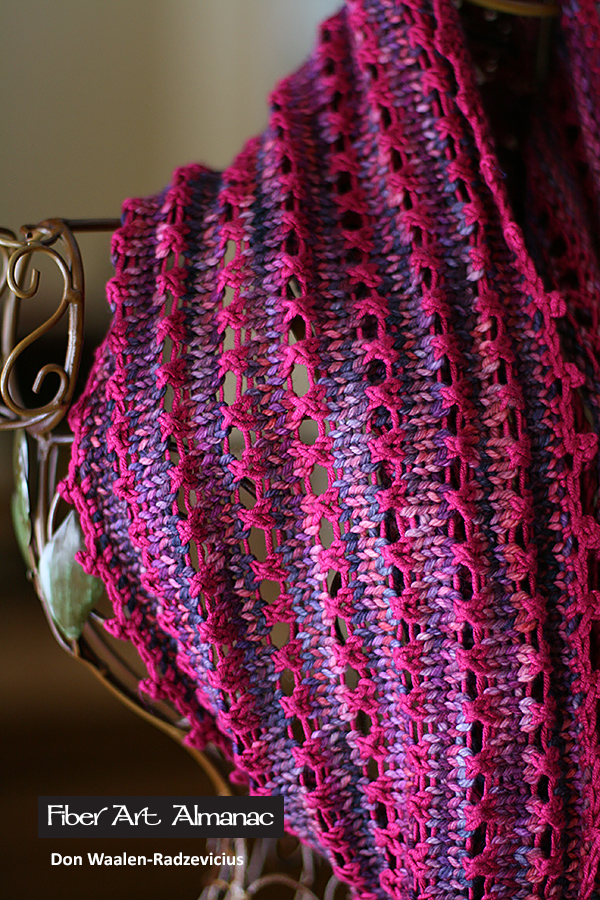 Don starts the design process influenced by two primary sources. Mostly it’s his love of family and where he grew up but a very close second is his love of the fashion world and the desire to create designs that people will enjoy knitting and will wear. There’s more than one pattern named after his great Grandmother, Lillian and her sisters. Each of Don’s patterns comes with a story. The above magenta cowl is named for Lillian. He says the solid knit sections against the open eyelet sections remind him of her stern, yet soft sides and the modern stylishness is something she would have appreciated.

Not concerned about making an artistic statement, he prefers to keep his personal views about societal issues out of the design process. His goal is to design patterns that knitters will want to make for what they are rather than what they are supposed to mean. Enjoy! That’s both his work motto and goal. Don’s signature pattern technique is to create a pattern that can be modified and look fabulous in different yarn gauges. He likes to include several stitch patterns in one piece so it’s a fun challenge for the knitter. 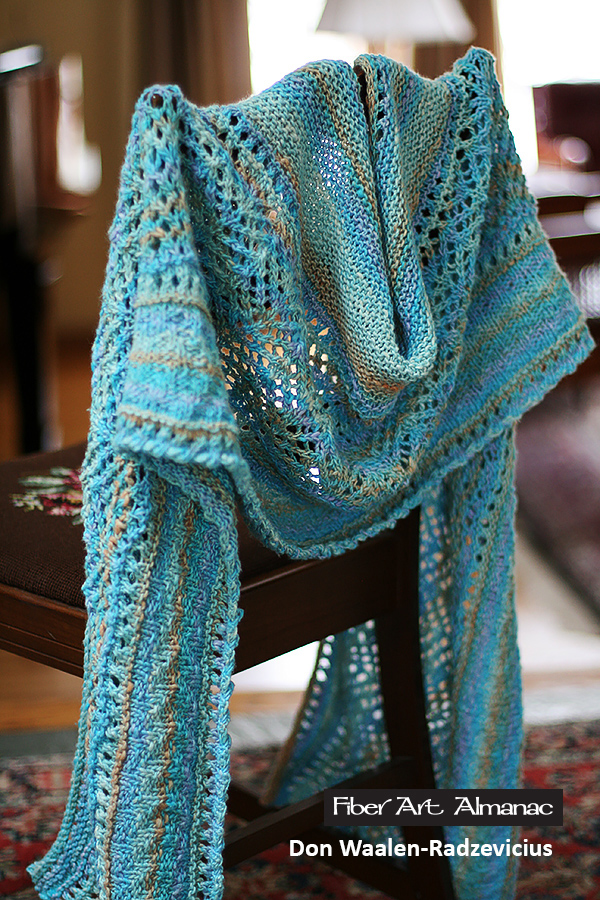 Don originally designed this shawl as a Mystery Knit Along that would double as a teaching aid. The techniques are easy enough for an advanced beginner, but the end result should prove satisfying for an experienced knitter as well. It’s long enough that you can drape it in many different ways. It’s named Blake after the two room country school house he attended in first grade. The teachers were Mrs. Sund and Mrs. Chamberlain. This shawl reminds Don of lessons learned in that schoolhouse. 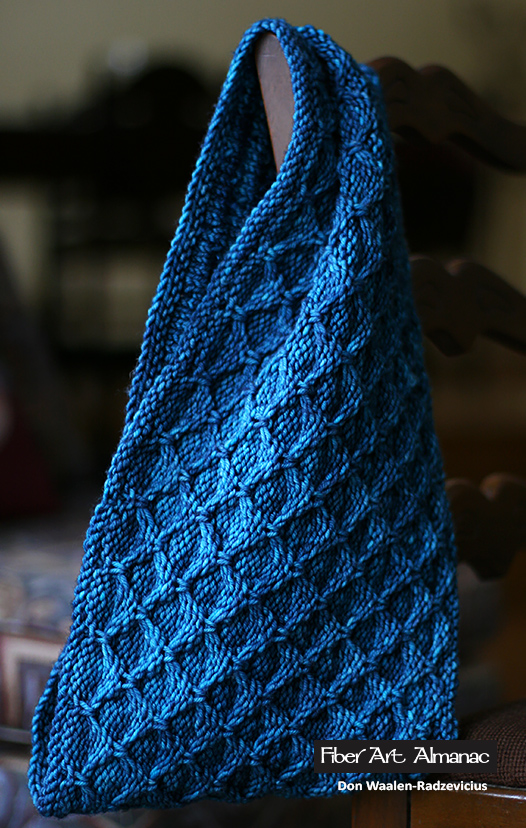 Rock piles, roses and bees. When the glaciers receded, they scattered the land with rocks. Like most farms in the area, Don’s family farm had huge rock piles that were created as the land was cleared for planting crops. As a child, he used to love climbing around on the rocks and gathering the wild roses that always grew in the crevices. Where there are flowers, there are bees. 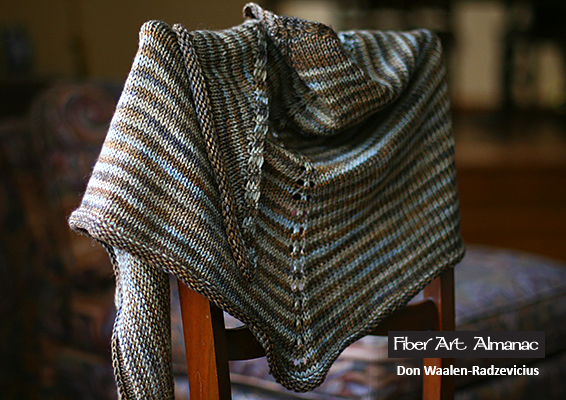 This pattern was names after Don’s father, Dallas, who was a farmer in west central Wisconsin. Don’s father planted corn; row after row of corn. As a child, he and his brother would run up and down the rows and play hide and seek or monsters or some other silly game.  Don lost his father several years ago to cancer, but while he was designing this small shawl and knitting the parallel rows he thought of his dad and all that corn. 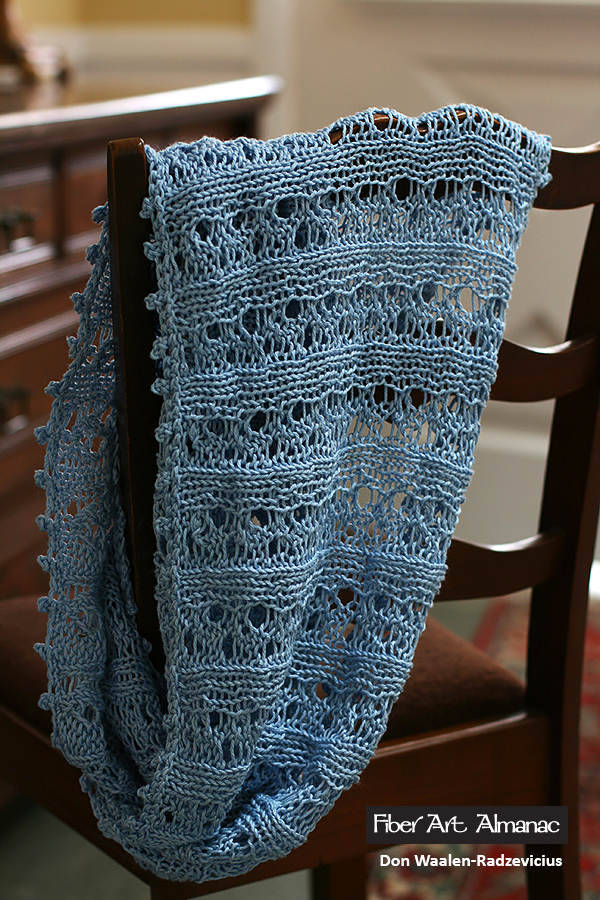 This pattern is similar to Lillian in that it is an open construction with large yarnovers. It’s named after Anne, one of Lillian’s sisters. It’s a large cowl, but the yarnovers and gauge give it a nice drape so it’s not bulky.

This past year Don collaborated with Tracey Schuh of Interlacements Yarn, also from Wisconsin, to create a collection of pattern designs with yarn specifically dyed for his designs. He took the collection to The National Needlearts Association (TNNA) show in California this last month. The enriching experience was a challenge with shipping issues but because of the solid design work, Don not only sold his designs but booked two well attended trunk shows at knit shops in Las Vegas and Lake Havasu City in Arizona. The exposure at the TNNA show has given Don the opportunity to design for other yarn companies and to submit patterns to well known knitting magazines.

Don’s patterns can be found on Ravelry here: Minnesota Sticks