Anita Jain says the biggest challenge to devoting herself to create fiber art is lack of time. Common Strands International Fiber Art Exchange, an organization founded by Anita and whose mission is to promote cultural exchange of traditional and contemporary fiber art, is set to launch its inaugural season. Launching any worthwhile project; whether big or small, takes time.  Through a savvy combination of collaboration, perseverance and sheer will power, Anita climbed the ladder from ‘great idea’ to seeing her vision exhibited at several large museum and art institutions in the Twin Cities. It doesn’t get much better than this with thousands of people in Minneapolis celebrating the 150th year of Finnish migration to the United States. 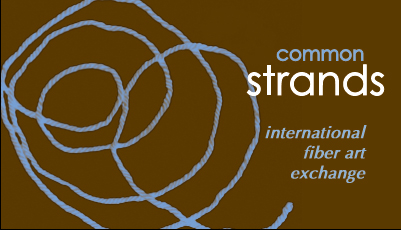 Let’s take a step back and create a connection—Anita emigrated from Finland some forty years ago. Not intentionally, but when you meet ‘the one’; where you set up housekeeping seems a bit trivial. Her childhood was filled with talk of fashion, fabric and design as both Anita’s parents were involved in couture clothing design and worked in prestigious Finnish atelje (atelier).  So the question, “what am I going to wear?” was not about rapidly slinging hangers across the rod in a closet, but one closely tied to identity and appreciation of art. As an adult Anita hasn’t been a part of the fashion world as most of her career has been in education, but she intentionally kept the design spark active in her creativity with fabric and fibers. Anita feels that fiber is an important medium in the world of fine art and its value and appreciation varies between Europe and the United States. And she would like to influence that perception. Thus–the spark for Common Strands International Fiber Art Exchange was kindled.

When I posed the question, how does the view of textiles differ between Europe and America, Anita shared that of course there is modern and innovative fiber art in both Europe and America, but Europe has an older textile history.  She feels there is more value put on fiber and textiles design as its own art form in Europe. Woven and felted wall pieces, the design of common household items, but most importantly textiles as art is common in large scale commissions throughout corporations, churches, universities and in public space. Anita sees the American fiber scene as alive, thriving and a veritable stew of creativity so it’s with delightful anticipation she showcases Finnish fiber art in this country.

In its kickoff season, which was planned to coincide with the 150th Anniversary of the Great Finnish Migration, Common Strands brings us a grouping of textile and contemporary Finnish lifestyle events. The two headliners are exhibits featuring the Finnish ryijy rug which is both traditional craft and contemporary art and a contemporary tapestry weaving exhibit from Finland’s Artist of the Year in 2010.  As the American Swedish Institutes says, “Finland and its design achievements will make a mark on Minneapolis during the summer of 2014.” Finnish migration 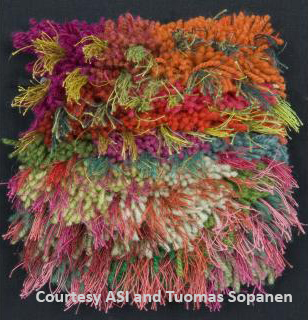 The American Swedish Institute (ASI) curates the Finnish ryijy rug exhibit named The Living Tradition of Ryijy—Finnish Rugs and their Makers (May 30-November 2, 2014). The exhibit will showcase the development of the ryijy from practical cloth to today’s expressive designs. The rugs are from the private collection of Dr. Tuomas Sopanen who has the largest collection of ryijy in Finland. Dr. Sopanen will be here for the opening events including several talks he is giving about his collection. Many ancillary events are happening at ASI throughout the summer. Have you always wanted to learn to speak Finnish? ASI is offering a class! Here is a link to all ASI events details.  Ryijy at ASI 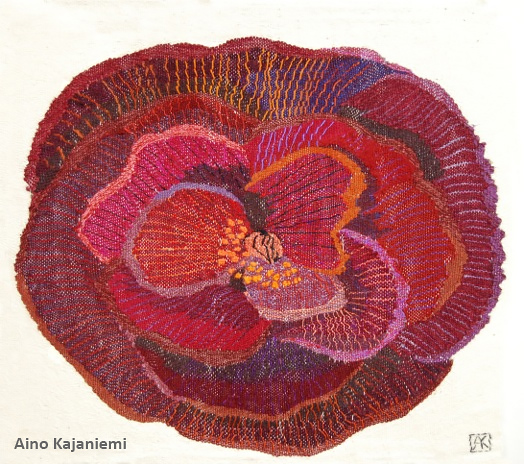 Aino Kajaniemi’s contemporary Finnish tapestry weaving will be exhibited for the first time in the US by the Textile Center in the Joan Mondale Gallery. The show is named Dreams and Memories: contemporary tapestries by Aino Kajaniemi (June 12-August 16, 2014). More info Ms. Kajaniemi does many commissioned pieces in Finland; some of which are liturgical works. She will give a presentation on her liturgical work at Christ Church Lutheran in Minneapolis on June 15. More info The history of Christ Church Lutheran and its architecture are the work of two important Finnish architects and the location was chosen by Common Strands for this reason. Interesting building history

Olli Hirvonen, who is a young jazz musician from Finland, will perform with his band at Christ Church Lutheran on May 28th. The concert is $13 in advance or at the door. Olli’s band

Anita’s efforts are a major contribution to this summer’s exciting 150th Anniversary agenda and through her vision we will gain insight and understanding of the Finnish and Finnish-American experience. I sincerely hope you will be able to attend one of these events!