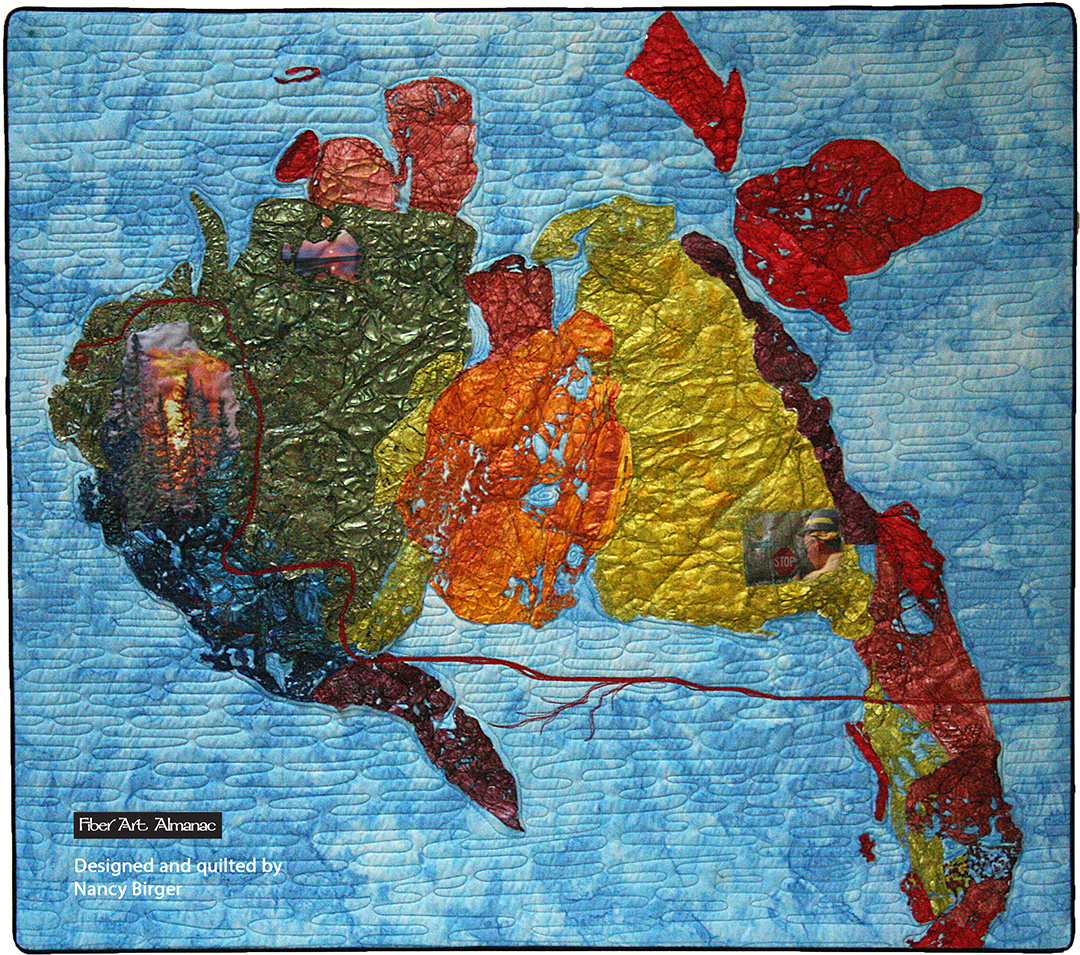 Nancy Birger told me about her husband’s work and how they have moved nine times over the years with assignments from the Fish and Wildlife Service to different parts of the United States. I asked how that influenced her quilting. She then showed me this amazing piece of art that depicts the Ham Lake Fire in the Boundary Waters in May, 2007. This is one piece in a series of three.

Overall, the quilt shows the progression of the fire and the severity of the burn as it raged though the BWCA and into Canada. Nancy used Tyvek (the house insulator) to visually describe the burn area. She burned the Tyvek then painted over the fabric using different colors of paint to match the severity of forest fire across the map.

Nancy used a photo transfer technique to add images of the forest fire into the quilt. In this photo, the flames that consume the trees look like they could leap off the surface. Combined with the visually crinkly and hard rough feel of the manipulated Tyvek, the quilt engages the viewer on more than one level. Direct cause and effect. The smoke alone must have been overpowering.

Meandering through the quilt is a red thread-painted line that gives us a point of reference on the map. That line is the Gunflint Trail.  The Gunflint Trail is a well known icon in Minnesota geography and history whose name conjures up a list of outdoor activities embedded in the Minnesota psyche. Outdoors enthusiasts go to that area for recreation but also for rejuvenation and inspiration, so the as the fire damaged the Superior National Forest, it changed a place that was beloved by many people.

The blue waters of the BWCA are depicted with hand-dyed blue cotton fabric. This choice of background provides a tranquil relief in stark contrast to the crunchy, scorched-looking burn area. The way the cotton was dyed gives the impression of summertime lakes and sky with blue depths and white billowy clouds. The quilt stitching is also in contrast to the inferno of the fire. Its horizontal lines are like pooling water with a slight ripple on the surface.