Last August, my sister and I took a road trip. We’re famous for our road trips and while we were only driving from Minnesota to Denver, we crammed quite a bit into the jog. We angled down and away from the Twin Cities and jumped on I-90 going west. That’s always a good sign. Heading west kicks up the adrenaline a notch; not sure why, but it probably has something to do with all that big sky and elevation. As I’ve mentioned in previous blog posts, our parents took us on many junkets across the United States as kids, so driving from the Midwest to the Front Range of the Rockies is a familiar route.  Lots of time to read the atlas, knit and think about the people who live in between.

My sister was going to Denver for a photo shoot and I was along as her second shooter. My one request was that we take a route that would put us in Scotts Bluff for a stop at Brown Sheep Company in nearby Mitchell. The location is way out on Nebraska’s panhandle, so we drove on I-90 almost to the Badlands. We turned south and found ourselves in what I would call ‘mini-Badlands’ and as we drove further into Nebraska, we experienced the full effect of Nebraska’s Sandhills in full yellow daisy bloom. Normally, in August, I would think the area would be dry-looking, but it was a waving carpet of green. We took the Mari Sandoz Scenic Byway where the vistas stretched from one side of the earth to the other, the road winding down into draws and back up over the ridge. 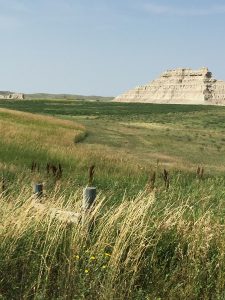 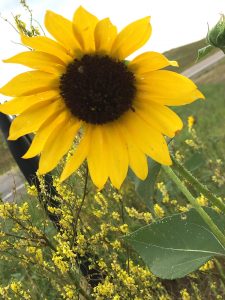 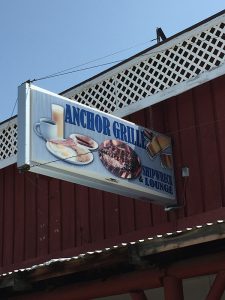 Our trip planning, which took place the previous day at a café in downtown in Chamberlain, SD, suggested we stop at the Scotts Bluff National Monument. It was raining when we got there, dulling the view, but the buttes are such impressive landforms that everything seems small no matter what the weather. As we drove on the road that skirts the base of the butte, I thought about how much land is NOT there. Blown away or erosion; it’s gone, and the buttes are the husk. The landscape is a photographic negative. I purchased a book on the geology of the area at the park service gift shop mostly because I’m interested but also because we told the gal at the ticket gate we were just going to use the restroom (which we did) but then got pulled into the exhibit space by NPS’ excellent use of dioramas.  https://www.nps.gov/scbl/index.htm

Brown Sheep is a quick drive northwest out of Scotts Bluff along the North Platte River. I’d called ahead to find out their tour schedule and was told its okay to show up on Friday. Brittany Wells, who is the Director of Merchandising, met us in the yarn store and led the tour. I’m grateful to my sister, Suzanne Shaff, for taking the photos with her phone camera. She’s a photographer by profession and even with using a phone, her shots are better than my shots with my SLR.

The company and the family have a long history in Nebraska’s panhandle. The Brown family settled the land over 100 years ago and began a successful sheep farming business that lasted for three generations until market forces in the 1970s required that they rethink sheep production. Harlan Brown, grandson to the original settler, decided to move in a sustainable direction and shear the sheep using their fleece as the saleable product. In 1980 he went on the road with his trunk full of yarn and the rest is history.

The manufacturing floor is impressive and is as clean as a whistle and surprisingly non-linty. As we walked to the middle of the floor, I tried to get my bearings as to where the process started. I will admit that I’ve been on two other woolen mill tours and they were small, local operations. So, I asked Brittany about the process they go through to produce the yarn, thinking they start with cleaning the wool. She said that since the area is a dry climate and water is at a premium (they average 13” of annual rainfall compared to Minneapolis’ 30.4”) they outsource the cleaning process. The product returns ready for spinning into various weights and blends of yarn. Continuing the tradition of innovative thinking, the company replaces machinery on a planned basis and even built their own wastewater treatment ponds to accommodate the amount of wastewater generated by the dyeing process.

Nebraska Stories filmed a segment featuring the family, their history and their innovative business practices. Did you know Ralph Lauren Polo used Brown Sheep yarn to knit the 2014 Winter Olympics hats and scarves? Here’s the link to the video: https://www.youtube.com/watch?time_continue=155&v=IKx7oyJvqtU 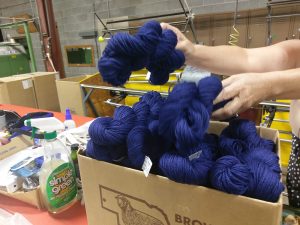 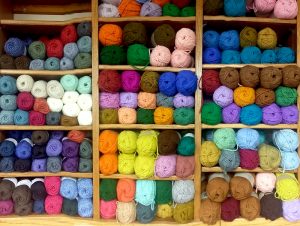 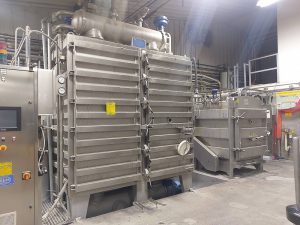 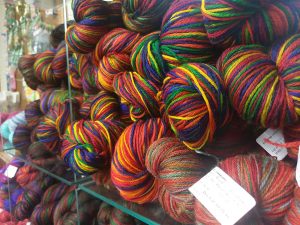 Brown Sheep dyes over 100 colorways across 24 product lines. Check out the comparison chart for fiber content, yards/skein, recommended needle size and average gauge. I purchased Prairie Spun DK which you can see here. Of course, working at my usual knitting pace, the yarn is still in hanks. 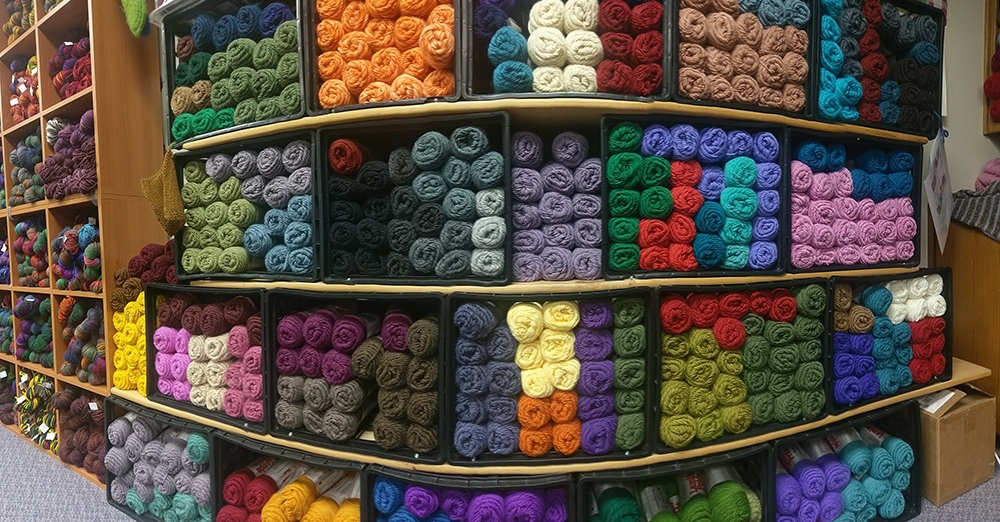 Just this year, Brittany and Peggy Jo Wells, her mother-in-law and Harlan’s daughter, opened Brown Sheep Fiber Arts Schoolhouse just down the road from the mill. On property the family donated to the school district years ago, the Haig School sat empty due to county school consolidations. Now back under management, the team have turned the schoolhouse into a fiber arts campus. For nine years, Brown Sheep Company sponsored Scotts Bluff Valley Fiber Arts Fair, but decided to focus on year-round fiber arts education. Stay tuned for more coming from Haig School. Right now, the best place for info is their Facebook page. Here’s Brittany’s blog post about the school and future. Haig School

If you want more info about Brown Sheep or to buy their yarn, click here! Thanks, Brittany, for an interesting and informative tour! 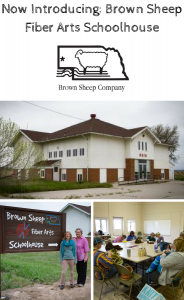 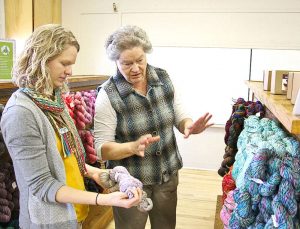 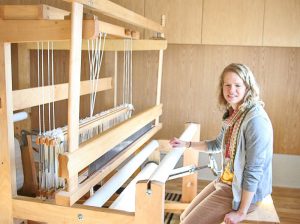