A day with Bemidji fiber artists

So, what did I think as I drove northwest out of the Twin Cities? To me, Bemidji is an iconic place forever embedded in Minnesota mystique. I can hear the drums beating out the familiar jingle, “in the land of sky blue waters…” Part of me was super excited to go north just because the landscape is both beautiful and ancient; a drive through hills of conifer and birch forest with glimpses of long vistas. One of three continental divides that run through Minnesota is just north of Bemidji. Dispersing our watershed of 10,000 lakes across the continent, the Laurentian Divide is a ridge that runs laterally across the northern tier. Some say the divide causes incoming weather systems to split, forcing weather patterns and watershed north and south. Super cool interesting facts about the Laurentian Divide 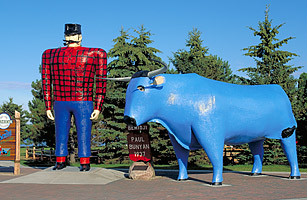 And then there are the outsized landmarks the visitors bureaus have erected to greet visitors on their way into town. The huge walleye on the shores of Lake Mille Lacs in Garrison, the jumping deer in Deerwood, the Gunflint Trailhead in Grand Marais and Paul Bunyan and Babe the Blue Ox in Bemidji. There are more, but those are the biggest I’ve seen. Big as in thirty feet tall kind of big. But since this is the middle of March in a very cold and snowy winter, I wasn’t driving four hours to check out Paul and Babe along the shores of Lake Bemidji. I was up here to talk with members of the fiber arts community and to learn more about the newest woolen mill in the country, Northern Woolen Mills.

I’ll say this at the outset; it was an awesome day and I couldn’t have met a more welcoming and collaborative group of individuals. My first stop was at Willow Wood Designs to meet with Bonnie Lundorff and Lori Forshee-Donnay of the Watermark Art Center in Bemidji. Watermark Art Center

Bonnie’s Willow Wood Market is trimmed in pine and filled with warm wool fabric, quilts and all of the dendritus you’d expect from a fully outfitted shop. She, Lori and I met to talk about developing a Fiber Arts Trail in and around Bemidji. Bemidji is a great place for a Fiber Arts Trail because there are so many people involved in fiber and textiles in this arts-centric community. Two Bemidji fiber artists have been featured in the 2014 Fiber Art Almanac, a brand new woolen mill just opened up and Bonnie and Lori, who don’t let any grass grow under their feet; organized the first ever Creative Spirit Fiber Festival held on February 22. Bonnie and Lori are collaborative community enablers. That’s a good thing when considering how many people they inspired with hands-on demos and beautiful fiber art at their festival. Speaking of festivals, Bonnie’s Harvest Festival, Quilt Show and Funky Junk Market is in it’s 14th year this coming September. Harvest Festival

After a fun and lively conversation with Lori and Bonnie, and discovering that we know folks in  common (Lori lived in Iowa City; Bonnie knows people in Mt. Vernon), I headed through Bemidji toward Fosston, Minnesota. Fosston’s tagline for their city is “where the prairie meets the pines” and in this case, it’s really true. Fosston is 40-some miles west of Bemidji and as I previously described the conifer and birch forests; it’s a quick change from all of that to the big-sky, big-land prairie.

STEPHANIE AND THE WOOLEN MILL 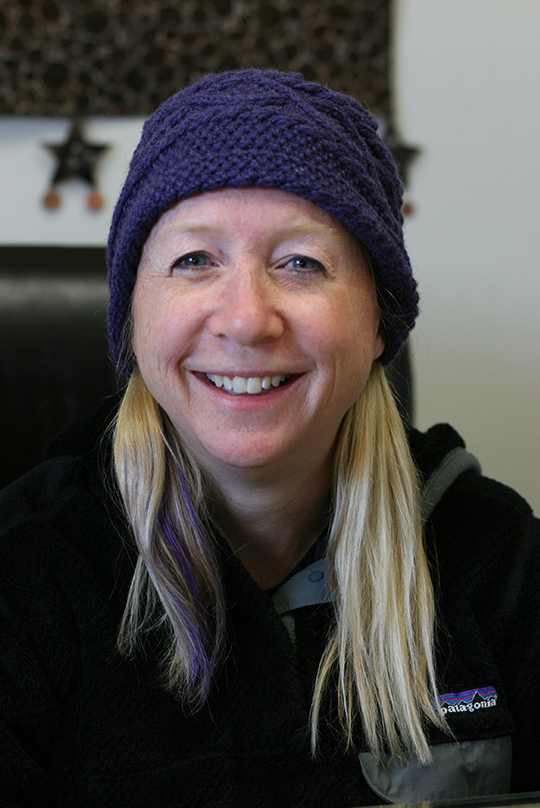 Stephanie Anderson, who started up the new wool mill in Fosston, is back home after many years away at Yellowstone National Park, Texas and NYC. A diverse group of places to have lived and having experienced more fun in some jobs than others, Stephanie’s business acumen is sharp. She knows when to seize an opportunity and get to work and has the heart of an entrepreneur working inhuman hours to get the operation running at tip-top levels. But I think there are two additional factors that will edge her business above competition. Northern Woolen Mills  One, she has a knitters’ hand. And her knitting is extraordinary. She has several pieces hanging in the shop part of the mill and the cable work is fabulous. To me this means that she understands her market in the first person, which is incredibly powerful, and knows what a good product should be. (I cannot believe I didn’t take pictures of the sweaters)! Of course I had to have a souvenir to bolster my lackluster stash (oh, sure) so I purchased some of the 70/30 merino/alpaca blend.  The hand has a sweet, soft feel even though it’s a worsted weight with color characteristics similar to tweed.

Two, her employees love to work there and work with her. I was given a tour of the operation by Lacey, one of Northern’s eight employees. Lacey started the tour at the beginning where the fiber comes in with barnyard fragrance, waste, and veggie matter. Next we went to the washing room complete with a row of insulated sinks and then on to the drying room. Tagged, layout on drying racks, the fleece was ready for carding. There was no comparison to the burlap bagged fleece in the garage. The fleece was gorgeous. soft and clean. Lacey went on and on about the washer’s production and how she keeps the drying room filled. Emily was finished for the day, but came around later with another Northern employee just to share their first sheep shearing tales with Stephanie. 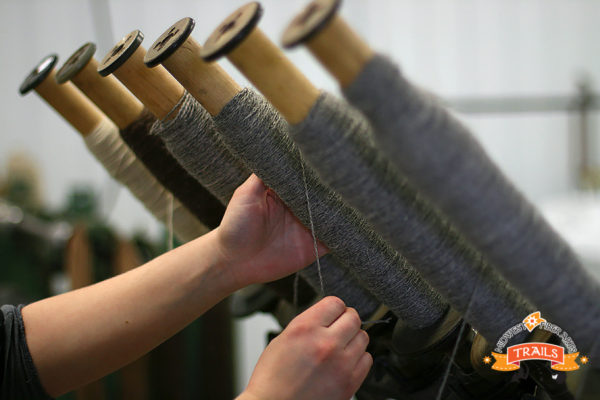 I’ve toured the Cedarburg Woolen Mill (who make wool batts for bedding) and watched a bunch of videos of yarn making on YouTube but seeing the old, and I mean early last century old machines up close and in operation is really something. They are an inventor’s dream. Somewhere between Willy Wonka and farm equipment with knobs, switches, reverse gears and made from cast iron. Totally cool. And totally hard to find, too. 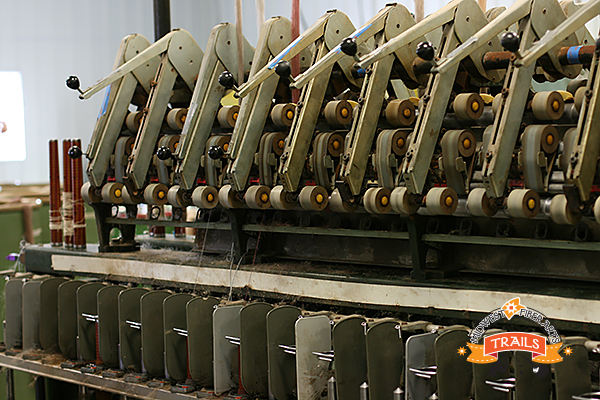 There’s a network of mill workers who know where these things can be found. Reaching out to some of the bigger mills in Minnesota such as Faribault and Bemidji, Stephanie was able to score machine parts that came in boxes with little information and certainly no owner’s manual. Counting on machine set up expertise from a man who helped to broker the machine purchases, Stephanie was disappointed when the dude from Canada skipped continents and took himself back to the UK. Failing to help set up the machines or provide one month of pre-paid training to Stephanie and her staff, Stephanie and her dad and employees took a different approach that has paid off. 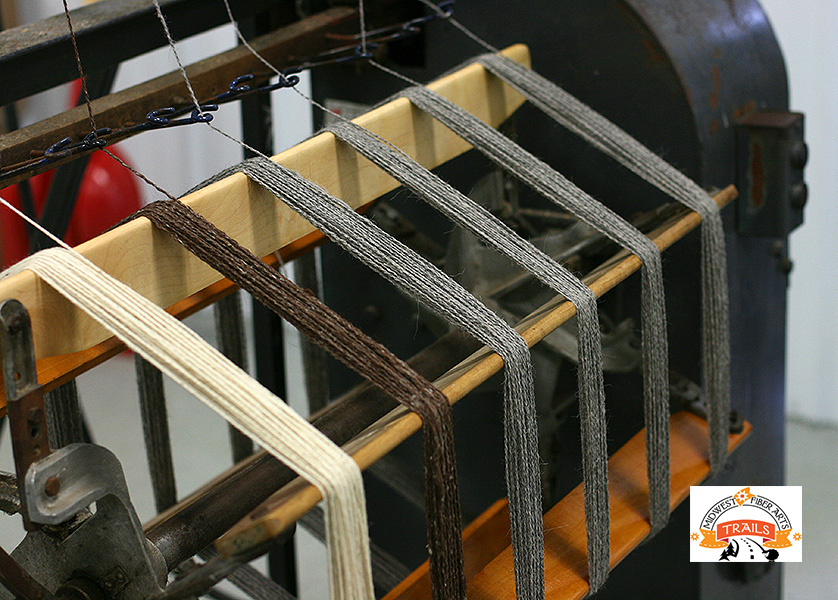 Their approach was sort of like ‘becoming one with your machine’. Processing fiber happens in distinct stages so once Stephanie made the diagram for each machine’s location, the parts were  laid out on the floor and each new employee put the machine together and learned how it worked at the same time. Talk about the ultimate on-the-job training experience and empowerment! Each employee is the expert with their machine and their part of the mill process. While on the tour I asked if the machines were hard to run–not knowing they could take them apart and put them back together again. Lacey responded, “I’m a bit geeky.”

What started all of this in the first place? Right time, right place is certainly part of the equation. But sometimes it’s when a person’s internal radar is tripped to become more aware of what’s going on or what’s missing that flips the switch. Stephanie, who had moved back to her roots in Fosston started coaching a couple kids on the high school track team. It was at a track meet where she struck up a conversation with a fellow knitter and discussed the scarcity of fine woolen yarns.

While executing due diligence and research about fiber mills, Stephanie also checked in with Bill Batchelder of Bemidji Woolen Mills. Right down the road, Batchelder is focused on making wool fabric for blankets, wool batts and selling products under their trademark name. Not interested in getting into the yarn business, they have been supportive partners in Stephanie’s endeavors. The city of Fosston, provided a location and offered a low interest business loan. 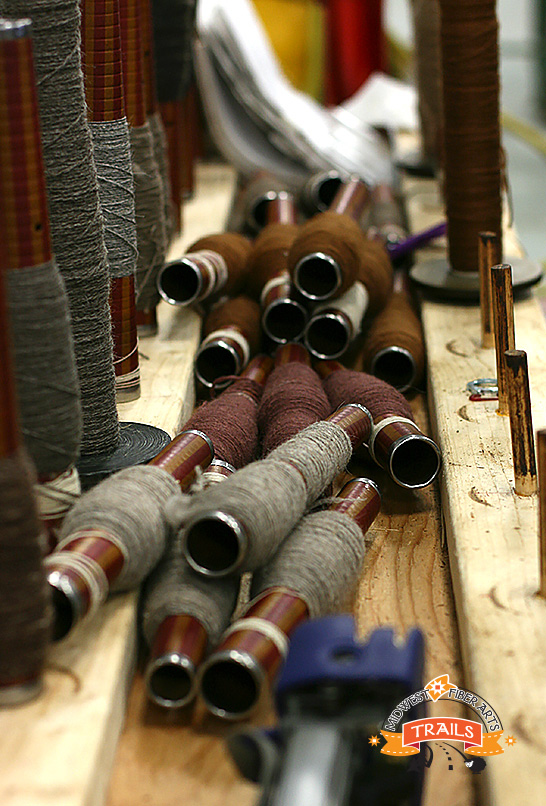 Reaching out to local farmers and ranchers, Stephanie thinks locally produced fiber is some of the best. Bison ranchers in North and South Dakota who sell the meat have no use for the fleece and toss it at the stockyards. Now, it finds its way to Northern Woolen Mills where it’s spun into a fiber whose characteristics are similar to cashmere. Read up on cool Bison fiber facts. North Dakota State University (NDSU) organized a sheep and fiber day at the mill expecting about twenty ranchers and farmers to attend. 120 people showed up! Including the handy farmer who took a look at one of the machines and suggested a gear shift behind a plate. The tension was adjusted slightly resulting in output with softer fleece.

Local farmer Alethea Kenney, from Reedbird Farm, raises Icelandic sheep and was visiting the mill at the same time as me. Alethea’s method of raising her flock using natural, holistic methods of care and feeding result in healthier lambs, higher quality fleece and meat and a disease free stock. Bison and Icelandic sheep are just two examples of local fiber but merino wool is still the staple and used as a blend with many yarns to get the best of merino’s long staple and elasticity and the softer hand of other types of animal fleece. 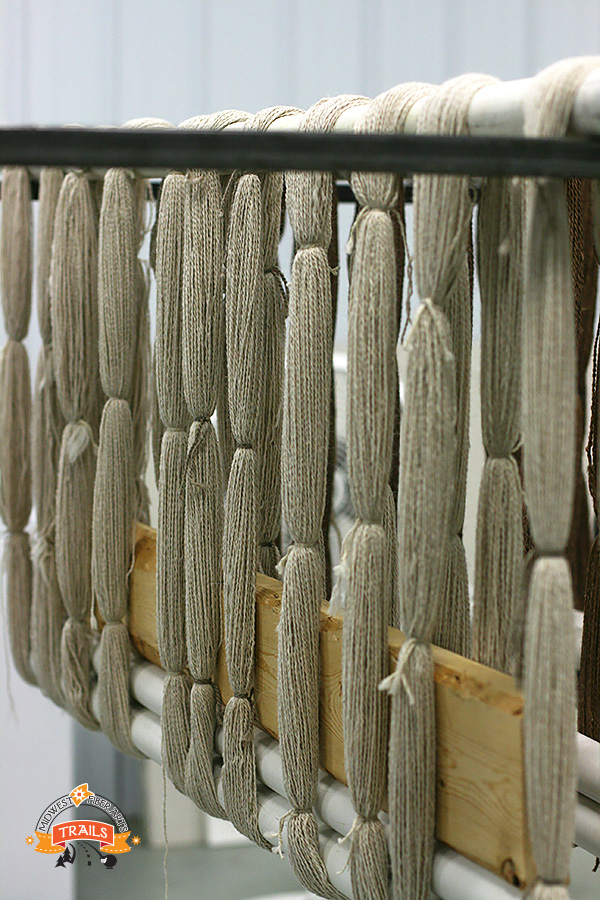 Producing 100 pounds of fiber a day, the mill is tagged as the nation’s second highest fiber producer (already). So there’s plenty of opportunity for growth. Stephanie’s future plans include expansion, two shifts and using bison hides in custom designed furniture. But for right now, life is really sweet where the prairie meets the pines.

My day was almost at a close and I wasn’t looking forward to the long drive back home at night. My last stop on my one-day Bemidji tour was at Karen-lisa Forbes house for dinner. Karen is one of the knotting artists whose work is featured in the 2014 Almanac. What amazing hospitality–roasted chicken and vegetables and a tour of her fabulous knotting art! Karen is encouragement on two feet, always smiling and looking for ways to empower her knotting students. In upcoming months I’ll feature Karen as an artist in her own story, but I appreciate her invitation to a hearty meal before with she and her husband, Mike and friend John. John’s on the KAXE Northern Community Radio Tuesday mornings at 6:50 and 7:20 a.m. Phenology Plus Link  Thank you, Karen!!