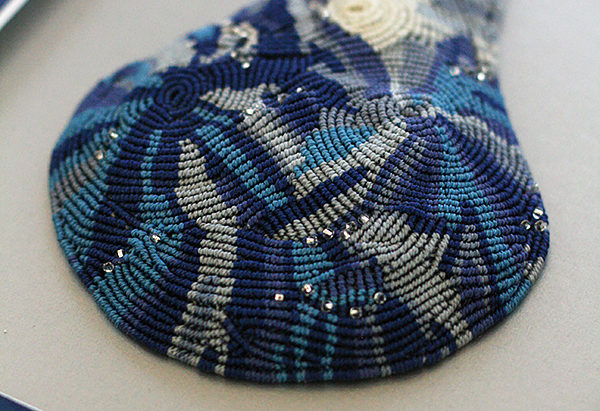 “From the chaos of a thousand leaves a tree emerges, rocks become hills, drops of water become lakes and rivers. Each half-hitch knot is a metaphor and testimony to the capacity of small things to transpire into landscapes.” –Karen-lisa Forbes

Karen works small scale. For example, she says that one square inch of knotting contains between 300 and 500 knots. From the double half-hitch knot that comprises tapestry knotting, Karen creates fine art inspired by her love of the natural world in Northern Minnesota. She says she is fascinated with geometry and symmetry, chaos and order found in nature. She is drawn to small details and the discovery of the extraordinary in the ordinary.

Karen was a featured artist in the 2014 Fiber Art Almanac and is now a part of the Pine to Prairie Fiber Arts Trail in the Bemidji, Minnesota areas. Recently she acquired studio space at Freehand Studio in downtown Bemidji. 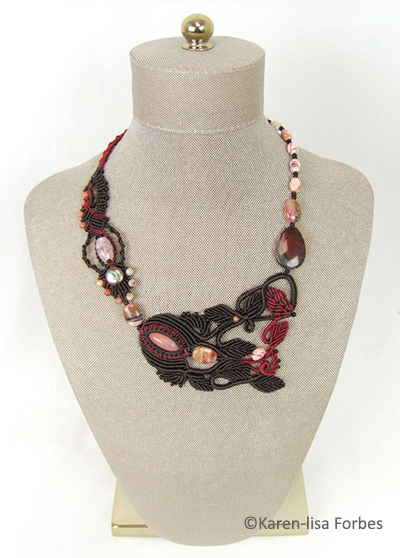 Karen’s narrative on She Wears It Beautifully:

From the inception of She Wears it Beautifully I knew I needed to use pieces of broken jewelry to represent the feeling of brokeness which accompanies depression and grief. My intent is to demonstrate how people who look “fine” on the outside feel broken on the inside. In this piece I have tied the broken pieces together to form a beautiful and functional framework; a metaphor for what this pain feels and looks like from both sides.

In talking about this project I was surprised by the number of people close to me who came out about their depression, their suicidal thought or attempts and losses of loved ones to suicide. A friend who had a failed attempt at death by suicide gave me a broken button. Another friend gave me a bead from the bracelet she was wearing the day someone close to her ended his life. John Bauer contributed two beloved pieces of jewelry, a rose quartz ring and a butterfly bracelet, belonging to his daughter Megan.  I contributed a broken pearl earring.

The focal point of this asymmetrical necklace is a rose quartz stone set in silver. Cavandoli knotting wraps the stone and continues to the right in a swirl of leaves and vines done in dark brown cord, accented by agate beads and veined with red cording. The knotting comes together at a teardrop shaped agate and continues to the back with additional agate beads before ending at a silver butterfly.

The left side of the necklace is chaotic. Each bead is given a different treatment as befits its story. A broken button finishes this side before ending in a spiral rope with loose ends at the back. The necklace has no functioning clasp and is permanently attached to the form. It is not designed to be worn and it cannot be taken off.

Rose Quartz is a crystal of unconditional love. It is a stone of the heart and carries the soft feminine energy of compassion and peace, tenderness, healing, nourishment and comfort.

Agates naturally develop when an empty pocket inside a host rock fills in molecule-by-molecule, layer-by-layer. These micro-crystals form concentric bands or other patterns. The colors and arrangement of the micro-crystals are influenced by changes in pressure, temperature, and mineral content that occur during the formation process. Unlike other gemstones, each agate is unique. Even slabs cut from the same specimen will vary in color and design. Agates look like normal rocks from the outside.

Agates are believed to overcome negativity and bitterness of the heart, by healing anger, fostering love, and lending the courage to start over. Agates are useful for healing trauma. 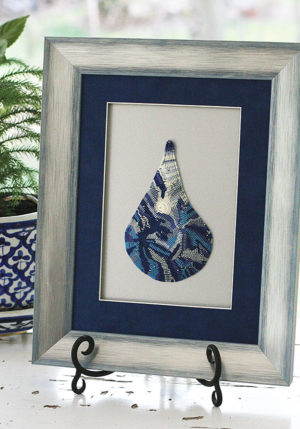 I am a fiber and mixed media artist. My primary focus is on Cavandoli knotting.

By definition, Cavandoli knotting, also called Tapestry Knotting, is a form of micro macramé. In the traditional Cavandoli style a single knot, the double half-hitch, is used to create geometric patterns

I was introduced to knotting in 2011 when I participated in a one day Cavandoli necklace workshop with nationally recognized macramé artist Joan Babcock. In 2012 I attended a two day Cavandoli necklace workshop with another nationally recognized macramé artist Marion Hunziker-Larson. On my first day of class Marion looked at my work and asked, “Why are you in this class? You already have these techniques figured out.”

And I do have it figured out. These two workshops comprise the 24 hours of formal training I have in Cavandoli knotting. I am otherwise self-taught, or as I like to say “schooled by the cord.”  I use 0.5 mm 3-ply C-lon nylon cord or 1.0 mm 2-ply Settanyl waxed polyester cord to craft one of a kind jewelry and fine art pieces. Occasionally, I un-ply the 0.5 C-lon cord and use the individual 0.165 mm strands to knot with.

On my own, I have discovered how to incorporate wire armature into my knotting to create sculptural effects. I’ve invented ways of securing stones and beads into the knotting to create texture and movement. I’ve suspended a large piece of knotting, containing a stone inside a bent root. I’ve knotted a bird and I have made a droplet of water entirely out of knots. I am taking Cavandoli knotting where it has never been before.

My skill and proficiency comes from and continues to grow through time spent with my hands on the cord. Knotting is slow business it can take up to an hour to produce one quarter inch of knotting. One square inch of knotting contains between 300 and 500 knots. Larger fine art pieces can take a hundred hours or more to complete.

To put this much time into a piece of art that measures no more than the palm of your hand takes devotion. To spend a hundred hours tying 24,000 knots requires dedication to your form. I possess such dedication and devotion. I am consumed by knots. My world unfolds in front of me as endless possibilities of things to knot. It’s what I do in every spare moment. Knotting is what my hands want to do. They feel born to tying knots. And maybe they were: my dad was a Marine and taught me to tie knots when I was a child. 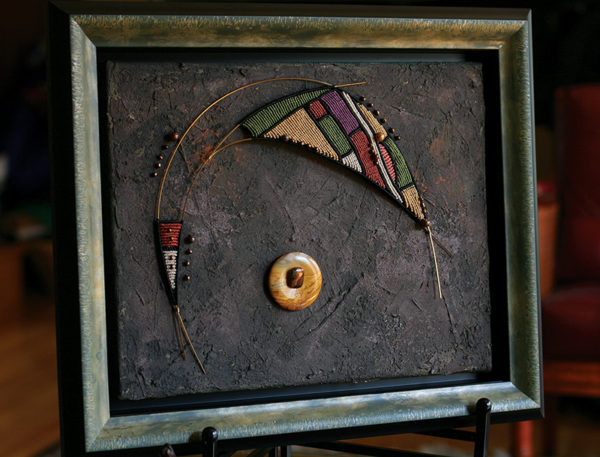 In the four years since that first class I have produced nine pieces of fine art which have been shown at two group shows. My knotted jewelry is on display and for sale at Shannon’s Art and Soul in Bemidji, MN and at the Lanesboro Art Center in Lanesboro, MN where I am a juried artist. Two commissioned works are in the process and upon completion will be sent for display in Great Britain. A third commissioned piece will be included as part of John Bauer’s traveling multimedia art exhibit “What’s Left” – Creating a proactive dialogue on suicide and mental illness.

Best described as organic in nature my style falls under the category of Impressionist/Abstractionism; I prefer a less fancy title of “knotted nature looking stuff.” My knotting is often mistaken for beadwork because the knots are so small and so close together.  Inspiration for my designs comes from a deep love of the natural world in Northern Minnesota. Fascinated with the geometry and symmetry, chaos and order found in nature, my eye seeks out and draws me to small details and the discovery of the extraordinary in the ordinary. I admire the works of Frank Lloyd Wright, Piet Mondrian, Georgia O’Keefe, Franz Marc and Lawren Harris from Canadian Group of Seven. You find their influences in my work.

Throughout my life I have worked extensively with many types of fiber – knitting, hand-spinning with drop spindles and spinning wheel, Hardanger embroidery, pine needle basketry, quilting, finger weaving and fabric post cards.  While I have loved each of these disciplines none truly felt like my mine. After that first knotting class everything changed. Cavandoli knotting is my art form. 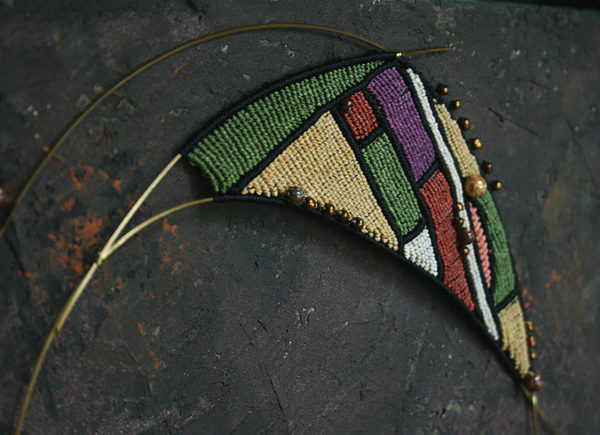