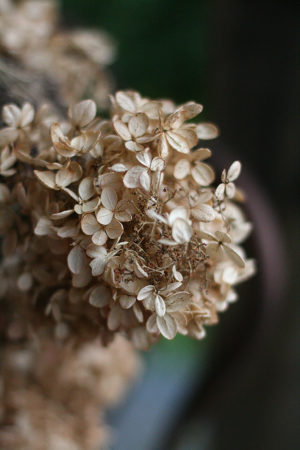 I always look forward to a drive so when Paulette mentioned she was going to be at a wool retreat in Wabasha, MN, I decided to take myself on a little day trip. This was late September and most of the fall colors along the Great River Road had turned into muted versions of themselves. It’s amazes me how the clear, pretty St. Croix River narrows by the time it reaches Prescott, WI where it meets the muddy Mississippi. The confluence just doesn’t seem large enough to hold all that water streaming from both rivers. I took the Wisconsin side down to Hager City and crossed back into Minnesota at Red Wing. It was the same weekend as the big art festival in Red Wing, so by the time I pulled in the traffic situation was desperate–I was happy to be moving through. Heading further south, I looked forward to Lake Pepin. I really love the river gorge geology and the ancient bluffs that rise from the river. Moving water is the great tailor; shaping the land while seeking its own destiny. Arriving at Eagles Nest Coffee House in Wabasha, I was greeted with the usual glad tidings and introductions. 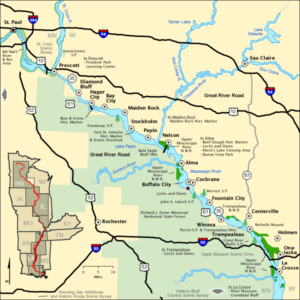 On the return trip, since Rob and the dog were at the cabin, I figured I’d continue my solo junket across the river and cover more Wisconsin road. Just as I was about to turn left and head north on Hwy 35, I saw a sign for a quilt show that pointed the other direction. Of course I went that way. The Annual Alma Historical Society’s “Quilting by the River’ quilt show. I’m going to have to come back for the 2015 annual because I never did find it that day. But what I did find was well worth the detour. 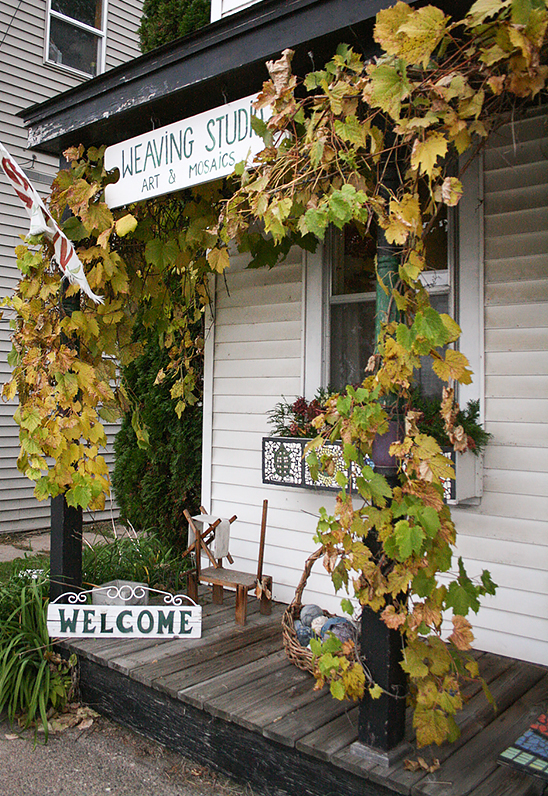 As I’m driving very slowly along Alma’s main street, on the lookout for the historical society, a little white house with black trim catches my eye. The sign across the top of the porch says, “Weaving Studio”. Grape vines climb the posts and a welcome sign sits tucked next to the wood porch step. A mosaic window box is loaded with dried hydrangea and greens and at that moment I had the feeling the quilt show was never going to be found. Inside, the studio is filled with looms, a bead encrusted hobby horse, wall hangings, art, novelties and strings of hanging wood beads that separate the kitchen from the front studio. My impression was a feeling of welcome and that I had just crossed a threshold into another person’s life.

Normally, I’m reaching forward to greet people, shake hands in typical gregarious post-20th century American style but I sensed the vibe was to listen and follow the flow. There was so much to take in and see–I was beyond curious and wanted to know about this person who created such a place of depth and delight. It’s Marcia’s house. Marcia Kjos who is a weaver, painter, book maker, teacher and seeker. It’s the seeker that I sensed first. Who else would surround themselves with things that are ornamented, yet let the space be commandeered by functional, working floor looms? As I later learned, Marcia is a person who takes things as they come to her; imperfect and natural, loving the puzzle of putting it together. 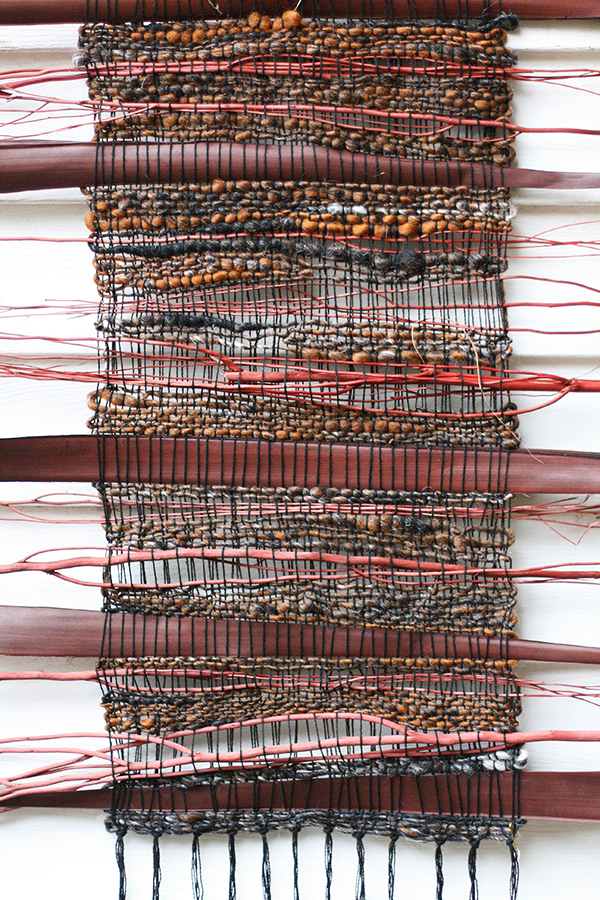 Right away I was drawn toward Marcia’s weaving that used sticks and rough, natural fiber. She smiles as she refers to this body of work as her ‘stick period.’ This work is tangible evidence of Marcia’s contemplation of the Japanese aesthetic, Wabi Sabi where “characteristics include asymmetry, asperity (roughness or irregularity), simplicity, economy, austerity, modesty, intimacy, and appreciation of the ingenuous integrity of natural objects and processes.” A friend taught Marcia how to weave using a table loom some fifty-five+ years ago. Young days as a recreational therapist in Milwaukee. Busy days with children, working full time, weaving and exhibiting and selling in five galleries. 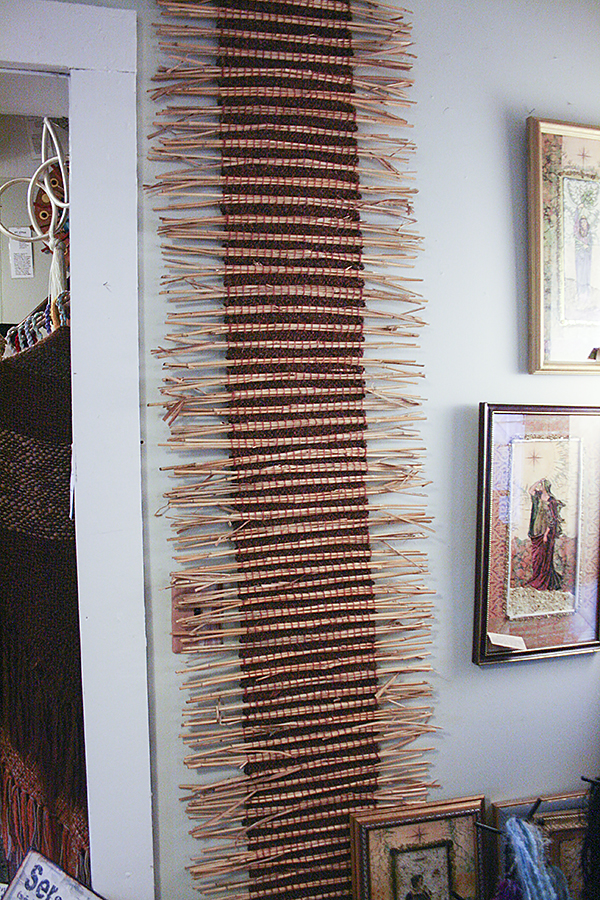 Thinking about the descriptors ‘fiber artist’ and ‘textile art’ and how each may apply to her, Marcia says she plays with all kinds of fiber in an artistic way. Her weaving and literary art are influenced (among other ideation) by literature, poetry and an aesthetic that seeks to see the invisible, paring away what is unnecessary. Some of her recent work includes a series of handmade books that have a small weaving and corresponding verse on each page. 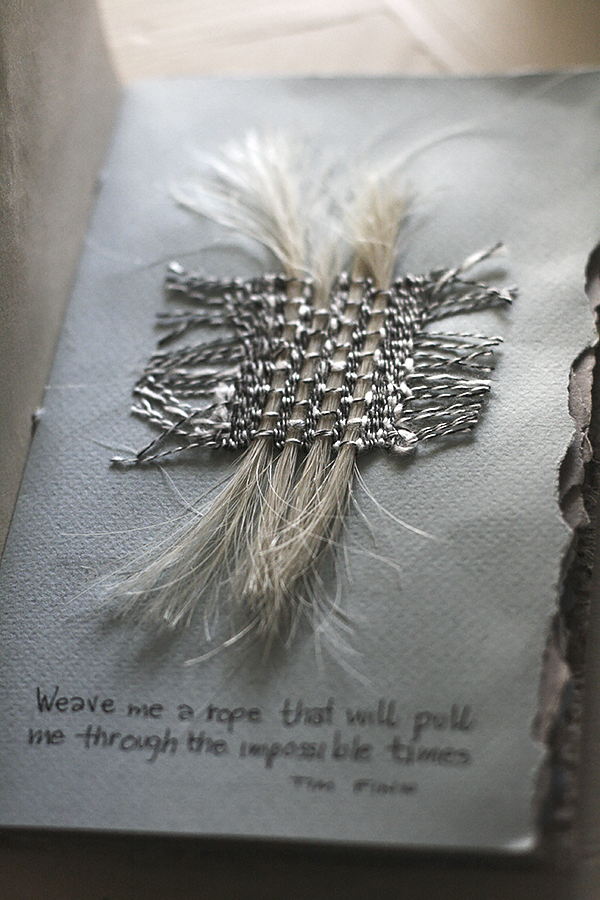 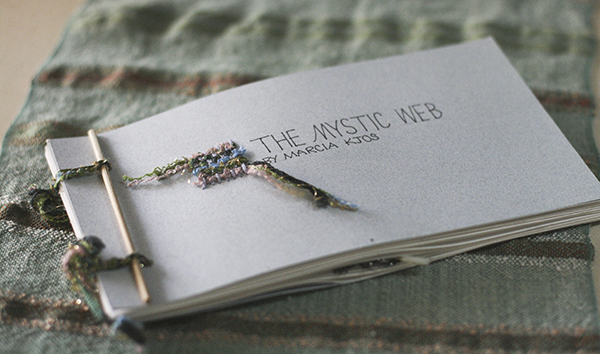 Marcia concedes there is a trade-off in this small town of Alma between its remote location and the beauty and good people. There are plenty of street names in Alma. It’s just that most of them refer to steep sets of stairs that go from the main drag to the next level up. The town, which clings to the bluff directly above the Mississippi, has a vertical orientation with an Imax panoramic view. Standing on Marcia’s front porch, the view extends across the ancient waterway to the bluffs on its far western side. And her backyard comes with its own very old stone wall that keeps the bluff on the bluff. The local B&Bs use a phrase in their marketing about Alma that gives you a flavor of the place–’spend a night or spend the summer’. And it’s entirely possible to fill a whole summertime with pleasant escapades along the Great River Road. 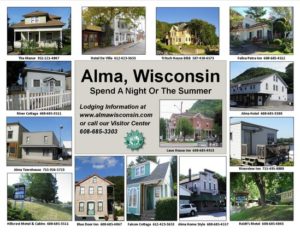 On a food note: if you like great BBQ, check out Pier 4 Cafe and Smokehouse conveniently located across the street from Marcia’s weavings studio. Also, Marcia’s daughter Kristin owns a gallery/shop in town called The Commercial. She and her sister, who is the local high school art teacher, are both weavers! 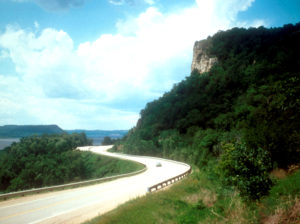