I have always enjoyed receiving stories from The Milwaukee Art Quilters (MARQ). This story is no exception and I hope you enjoy their quilts as well. 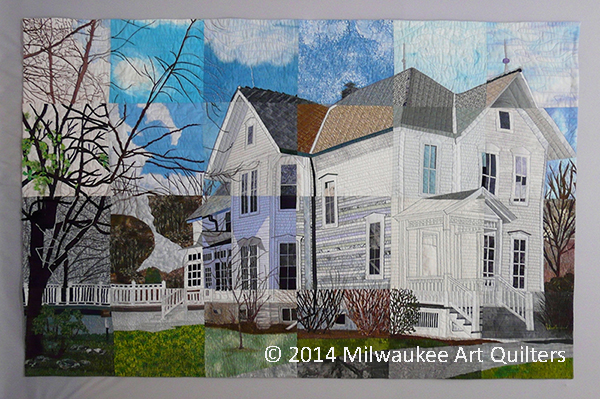 The Milwaukee Art Quilters (MArQ) is an unusual guild with no officers and no dues. The work gets done by volunteers from among the 51 listed members. Meeting monthly in Wauwatosa, a western Milwaukee suburb, its members drive up to 80 miles roundtrip to meet, with one member making the trek from Illinois, even farther. I first heard of the group when I moved to the area from West Virginia in 1995. My friend Caryl Fallert in Chicago recommended the Milwaukee Art Quilters founded by Necia Wallace, who had gathered a small group of artists from the North Shore Quilt Guild in 1992. The seven or eight members met in each other’s homes all over the Milwaukee area. Word got out; membership grew.

By 2001, with about 25 members, we had trouble fitting in anyone’s house. My daughter, Teresa Jennings, ran a business, Plank Road Publishing, which had a large meeting room. I asked if we could meet there; she graciously agreed. And MArQ had a new home. Our meetings usually run this way: a short business meeting that includes introductions, old business and new business; and the main event, show-and-tell. We take turns, alphabetically, in leading the meetings. We share ideas and techniques, tell stories of successes and near-disasters, ask for critiques, and take part in at least two challenges per year. We have become good at finding venues to exhibit both the results of our challenges and other work. And more and more artists have joined us.

In 2010 we thought ahead to 2011, when we would have been meeting at Teresa’s company for 10 years. We decided it was time to thank her and her husband Paul for their generosity. Teresa and Paul had not only been growing their company, which specialized in music for elementary students, but they had been busy restoring their home, an 1884 Victorian farmhouse. A collective light bulb went off–how about a slice quilt of their pride and joy, the old Victorian? The only person in MArQ who had made a slice quilt before was Judy Zoelzer Levine. She agreed to be our designer/orchestrator.

We had to consult with Teresa because we needed her help with the photographic view she would prefer. Since she did not want trees and shrubbery to obscure her 1884 gem, she provided us with a late winter picture, complete with a Wisconsin gray sky. Judy photo-shopped a blue sky with fluffy white clouds to set off the house more attractively. She then sliced the image into 24 blocks and turned each photographic image into a cartoon to clarify and simplify the elements. With the help of Kathleen Hughes and her wide bed printer, she was able to fashion a full-sized, gray-scaled cartoon paper pattern of each block. A heavy black line around each block would be the seam line. Judy asked artists to continue the design beyond the black line and to allow a one-half inch seam allowance to facilitate alignment adjustments. As Judy and Kathleen have recalled these wide-bed sessions, both of them say there was considerable laughter seasoned with untoward remarks aimed at the balky machine. 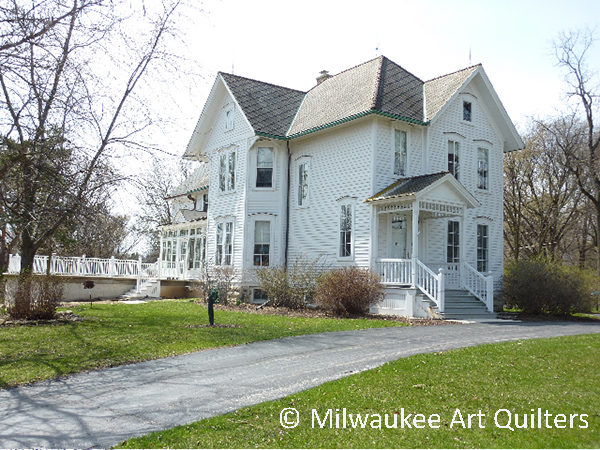 Each block maker received the full-sized, location coded, paper block pattern, a gray-scale location map, and a large color photo of the house with block locations. Any technique would be allowed. And how! We ended up with raw batting as clouds, hand and machine embroidery, meticulous piecing, use of markers, appliqué, fusing, discharging, 3-D leaves, and painting. We soon had 23 volunteers who enthusiastically attacked their individual blocks. But block number 24 was unclaimed. Judy finally declared that the quilt would go forward with a hole in it. Someone stepped up, thank goodness. What a great day it was when Judy brought in the quilt top, 69.5 inches wide by 45 inches high, all pieced and aligned so beautifully.

Now it was the turn of Terri Kirchner and her long arm, quilting machine. Terri was masterful—following each clapboard, architectural detail, and tree branch, making the connections between blocks quite cohesive. I had volunteered to do the finishing–facing, sleeve, and label. However, I suffered a shattered femur, which precluded any machine work for about six months. Deb Kinder and Linda Benson stepped in to help, doing the sleeve and facing. I was finally able to do an extensive label with “before” and “after” pictures of the house, its history, and the history of the quilt, along with acknowledgements of who did what.

We held a small ceremony to present the quilt to Teresa and Paul Jennings. It was rather emotional but so rewarding to be able to thank these two benefactors. Since I knew Teresa would not be hanging the quilt just yet as she continued to do more restoration, I volunteered to send the quilt to shows, hoping to win enough prize money to cover the entry fees and shipping costs. So far so good.

It has won prizes at each of the shows it has been in. To wit: Honorable Mention at the MidAlantic Quilt Festival in Hampton, VA; First Place and Viewers’ Choice at the Crazy Quilters Show in Mukwonago, WI; First Place, Viewers’ Choice, and Judge’s Choice at the It’s A Stitch Show in Jackson, WI; Best of Show and First Place at the West Virginia Quilt Festival in Summersville, WV; Second Place at Quilt Odyssey in Hershey, PA; Honorable Mention at the International Quilt Association Show in Houston, TX; and Best Group Quilt in Road to California in Ontario, CA.