I returned from the cabin in northern Minnesota on Labor Day Monday about noon. I drove back with our youngest son and his girlfriend (whom we like very much) after spending a wonderful weekend with family on my husband’s side. Anywhere from 8-14 people at the beach, eating meals, hanging out (some family members enjoy agate hunting), golf and other activities that revolve around time spent with cousins, siblings and the outlaws (I’m one of those).

After all of that activity I had the feeling of “what now?” as I took a look at my schedule for the week. The Wisconsin Sheep and Wool Festival. But the question was; should I head to my folks’ house in eastern Iowa and visit our son in Davenport prior to the weekend in Jefferson, WI or go there after Sheep and Wool?

In other words, should I just leave the clothes and hair dyer in the bag or unpack for a couple of days? Having trouble settling in, I rationalized it by saying to myself, “it’s already a short week…get back next Sunday night, ready for Monday and dive in…”

I took off again Tuesday at noon. Called the folks and said, “Hey guess what!” and pointed the car toward Cedar Rapids with enough books, clean clothes and knitting to last for a minimum of 5 days on the road. I needed some good thinking time and the long view of prairie skies (my first recollection of the world as it should be). Combined with the background noise of the road I would be able to get myself square.

The first few days on the road have been a traveler’s dream. Oh I know the weather is a changin’ with the crisp fall air that’s started to blow underneath the door, but the drive was spectacular. Tuesday night and Wednesday was spent chatting with my dad and stepmom. I really don’t see them enough. Late Wednesday afternoon I drove to Davenport where Sam jumped into the car and we headed toward the Mississippi River for nice spot to have dinner. I spent Wednesday night on Sam’s couch in his tiny apartment but slept surprisingly well. Felix, the striped kitty, was his usual playful self. He jumped up long enough to rev up the purr motor and take a couple playful chomps on my fingers.

The next morning I headed north on US 61.  I reveled in the sky and the yellow flowers that bloomed along side of the road. Crops looked faded and mature, bean fields yellowed and the corn stalks were dry from the cob on down. I didn’t see tell tale signs of drought, though. Things looked green. But mostly what I saw was the view from hilltop to hilltop; the incredible vista along the ridge in Jackson County Iowa.

The view, the late summer light, and the gentleness of the rolling landscape struck a chord in me which has always been a part of my life. I felt at home. I will always be drawn to it, the familiarity, the feeling of who I am. I’m most comfortable within the folds of that Iowa landscape.

I continued travelling northeast toward Dubuque and on the angle into Wisconsin. It’s really cool how Iowa, Wisconsin and Illinois come together and if you drive across the Mississippi River on the first bridge from the south, you’ll be in Illinois and if you take the second bridge (which is the one I took) you’ll be in Wisconsin.

I headed northeast. Destination: Madison. The road loped and dipped past small towns and interesting land formations that makeup southwest Wisconsin. This region is called the Driftless Area. What is the Driftless Area? Basically it’s where the glaciers didn’t deposit their scrapings as they receded and shifted around. This area was spared so today it reflects the deep grooves of water and wind erosion with an abundance of cold water streams, rivers, valleys, soul searching vistas and woods. 85% of the Driftless Area is in located southwest Wisconsin with the remaining spread across southeastern Minnesota, northeastern Iowa and little bit in Illinois.

I stopped in Mineral Point, WI to see a new customer, Simply Scarfs owned by Jony Hauck. I was blown away by Mineral Point. Talk about a great weekend destination spot! Mineral Point is hosting a Cornish Festival on September 28-29, 2012 to celebrate their sister city of Redruth, Cornwall, England. The main street in downtown Mineral Point looks like Cornwall. http://www.cornishfest.org/index.html 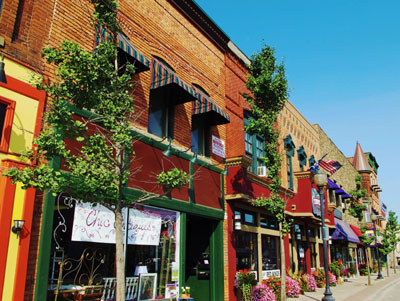 Thinking that most of the upper Midwest was settled by stout Germans and their Nordic neighbors, I was unaware of the migration from Cornwall, England to the American Midwest. Between the potato famine in Ireland and the closure of many of the tin and copper mines due to depletion or the minerals were too deep to bring up; the workers were short of food and livelihood. The Cornish settlers brought their mining know-how, solid work ethic and a desire to not pay the Crown or the Church most of their wages.  The mineral mines in the southwestern counties of Wisconsin flourished. By 1850 new mines in California, the Upper Peninsula of Michigan and the Iron Range in northern Minnesota opened up and there was another migration outward.

The Driftless Area leveled off as I approached its eastern boundary closer to Madison but still included interesting formations that seem to rise off the horizon. The largest one I saw is West Blue Mound at 1716 feet elevation. It was really impressive! I was reminded of the guy who walked up a hill and came down a mountain—wait! Guess that was in Wales.

The route I took was meant to be. My next stop was The Sow’s Ear in Verona located just south of Madison. My road took me right there. Exit stage right to take a knit shop break. I did chuckle a bit when asked about my knitting. Parked in Badger country, I blithely knitted away on a Nordic hat in Golden Gopher colors. I really enjoyed my visit at the Sow’s Ear but I wish they would have unpacked the Almanacand had it on display somewhere in the shop. I asked about it and was told there are many fall receipts waiting to go out. I don’t want to worry about it not having enough time to sell. I like the assortment of yarns, the staff and the FOOD at the Sow’s Ear so much. www.knitandsip.com

Next up, a quick trip up the Beltline though Middleton to Waunakee. What does ‘Wau’ mean anyway? Lots of place names in Wisconsin include ‘wau.’ Because of the many Indian languages that have been spoken in the area, it’s hard to pin it down exactly but there is a guy who wrote a book on the subject.  He’s Virgil Vogel and the book is “Indian Names on Wisconsin’s Map.” 1992 U of W Press.

Toward the end of the day on Thursday I was feeling a bit anxious about the next few hours. I always feel this way when I’m not sure where things are located. Why anxious now after I’ve spent the last couple of days traversing three states? It’s my high expectations, not being able to control the whole situation and schlepping heavy luggage, books (they are very heavy) under a deadline. I wasn’t super prepared with lists like usual because I left home so quickly.  And Paulette, my booth mate, doesn’t have a cell phone so I can’t connect with her. She likes travelling off the grid. So I was supposed to just let it happen—I’m not really good at that.

Add to my general unease was the knowledge of the alleged murder that took place in the house which is now the Fargo Mansion Bed and Breakfast. And that’s where I had reservations. Yikes! Beforehand I read the whole story about the business baron, Enoch Fargo (think Wells Fargo) who wasn’t charged but probably should have been charged with the death of his wife. Tom, one of the innkeepers said he was at the exhumation of her grave. She was exhumed recently, about 100 years after the whole incident took place. He said half of her face was missing. Eeck!

My room was painted a very cheery egg yellow with lots and lots of white woodwork with a beautiful bathroom done in Italian marble top to bottom. The furnishings were nice antiques and a hand stitched quilt covered the bed. Yes, I examined it quite closely! The least creepy room for miles around. I received a tour of the mansion and it is all well done. No dolls or weird mannequins dressed behind doors. I booked for next year before I checked out.

Set up complete, I traversed the back roads from Jefferson to Lake Mills.  As stated, the big house made my radar go up a little so when I drove down the street and saw the entire mansion lit up, blazing with lights from every room I relaxed and realized it is indeed a beautiful old home. And there on the wrap around front porch were the owners chatting with the neighbors empty pizza boxes piled on a table. A good place to be after all.

Up early, booth all set with Paulette’s beautiful crazy quilt draped around Emma’s shoulders, books tucked into an old dresser drawer sitting on the table, opened to selected pages, we took turns scouting out the vendor show. Many of the vendors are the same as years past such as Mielke’s Fiber Arts. They have every tool and supply you could possibly need, want or desire. Really. href=”http://www.mielkesfiberarts.com/”>www.mielkesfiberarts.comSusan’s Fiber Shop also does big business in a big way. Books, wheels, some fiber, always a line at the till. href=”http://www.susansfibershop.com/”>www.susansfibershop.com Sutters Gold ‘n’ Fleece—thanks to Joe for winding up kit yarn for me. I swapped several Almanacs for winding time. Has to be the most patient man on the planet. www.suttersgoldnfleece.com

If you can possibly believe it, I didn’t buy any fiber this year. I know, I know—what was I thinking? Talking about the Almanac was the most important thing.

This year I invited one of the fiber artists to be a part of the action. Her name is Crystal Woolsey and she’s a knitter. Very beautiful creations—all one of a kind. I’ve suggested she write up some of her patterns. I featured her Wisteria Lace Coat on Emma and also the lovely lace shawl. She received many compliments and fielded questions about the techniques she used to make the lovely pieces. I enjoyed having her there! 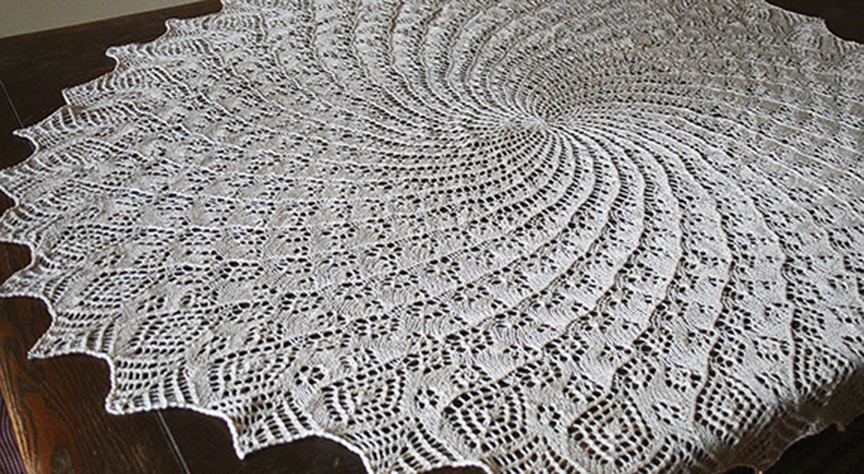 My boothmate, Paulette Wentzlaff, is an incredible wool dyer. She has quite a book of recipes and continues to inspire lots of new rug hookers. I’ve taken up the craft and look forward to inspiration from the lovely colors or wool! www.riverrockwool.com Her wool can be used for more than rug hooking. It’s available by the yard or in smaller, project sized pieces. Paulette teaches rug hooking at Shepherdess Naturals in Anoka twice a month and has a wool studio in her home. For details link to her website. The rugs featured below are Sharon Smith’s design, hooked by Sharon with wool from Paulette. Sharon’s designs can be found at

I was happy to get home on Sunday with a refreshed purpose top of mind! Oh, I did sell a Willa Blanket kit, too!

p.s. photo credits belong to various Chambers of Commerce for the road shots and Wildwood Press for the fiber shots.