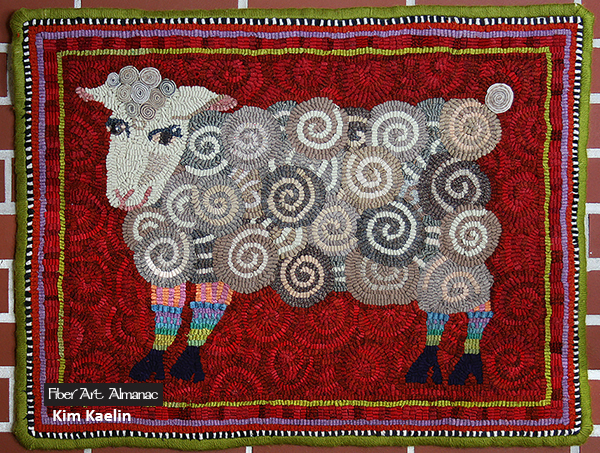 Rug hooking, as its known today, is thought to have been first developed in the early Colonies and Canadian Maritime Provinces. History has many examples of woven floor mats across cultures from the Vikings to the Egyptians. The North American rug hooking style has only been around for a couple of hundred years, however, and has very humble origins born out of necessity and thriftiness. Unlike its city-mouse cousins of embroidery and quilting, country-mouse rug hooking was a craft that depended on re-used bags and recycled fiber. Early on, the materials used to make rugs were primarily old clothing, scraps of thrum (9 inch wool fiber waste from textile mills’ floors) pulled through re-used burlap feed bags. A primitive style, now known as Folk Art, used simple color block designs with little or no shading. The resulting piece kept early American floors comfortable in the summer and beds warm in the winter.

The concept of designing rug patterns and of using new materials designed specifically for rug hooking gained popularity in the early 1930’s from efforts by American Pearl McGowan.  Pearl set skills standards for technique and formalized its teaching methods. These standards were drawn up in accordance to earlier guidelines established in 1916 by Lady Anne Grenfell. The efforts proved successful and rug hooking gained popularity and didn’t die out. It’s interesting to note that the use of cut wool strips was also introduced by Pearl McGowan. Trimmed edges aided the ability to use more intricate color shading with narrower strips of fabric.

Today, there are two major styles of rug hooking that relate primarily to the width of the strip of fabric. The wider strips fall into the primitive style with less color shading and simpler geometric designs. Fine  hooking uses the narrower strips. Wool dyers have also opened the door to a wide range of color variations with over-dyes, gradation and across the color spectrum from super bright acid dyed wool to muted traditional folk art colors. There are unlimited options.

The featured rug is called “Curley” and was designed by Melissa Elliot of Main Street Rugs. It was hooked by Kim Kaelin.