Deep Roots: a textile art exhibit from artists whose roots are in the Nordic countries

The exhibit opens on March 28 and runs through April 25, 2015 at the Dassel History Center in Dassel, MN.  The Dassel-Cokato area is known for its Finnish heritage, as Cokato was one of the primary destinations during the Great Migration from Finland in 1864. This exhibit features 23 textile artists and 50 pieces of their work. This exhibit is curated and presented by Common Strands, International Fiber Art Exchange. Portions of the exhibit will travel to Finland for a summer exhibit. The exhibit encompasses a variety of textiles from weaving to wearable art.

The feature artist in this story is Susan Johnson from Viroqua, Wisconsin. Susan has three pieces in the exhibit. The story about each of her works is in her own words: 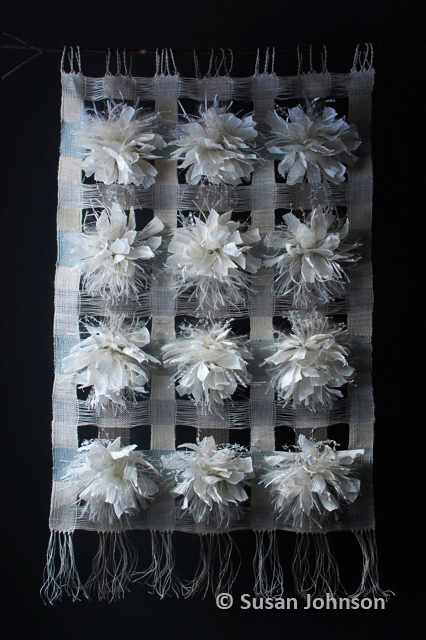 My mother and I traveled to Finland and Sweden in 2004. We visited her mother’s and father’s families. We went to Tampere where her mother had lived before she emigrated alone, to the USA, when she was 20 years old. Her mother had worked in Finlayson textile mill, and lived in company housing with at least 3 of her sisters. I also saw paper weaving while I was in Finland, in Rovaniemi, and in Helsinki, the work of Hannah Korvela.

My Finnish grandmother died when my own mother was just 8 years old, in Northern Minnesota, so I never knew her. She never knew me.

Though I always asked about her, my mother had few memories of her own mother, or about her life in Finland. I began imagining my grandmother, Impi’s life when I was very young. The first paper and linen weave that I made about her, “All My Eggs in One Basket” is a linen and paper transparency weave on a larger scale. The paper bursts in that piece are eggs. (Exhibited at “Honoring Tradition: Finnish and Sami-inspired Textiles”, 2008 at the Tweed Museum, Duluth). Her choice to come to the US was not a free choice. There was civil war in Finland, her brothers had already been killed. For throwing bread to her starving oldest brother, being held prisoner in a “molasses vat” she was in danger of being targeted herself. Her other sisters pooled their money to buy her steamer ticket, to North America, her escape. 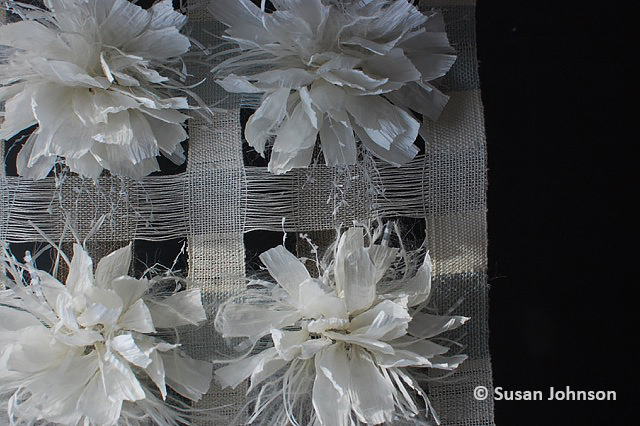 Memories are fragmentary, but this history, is especially cryptic. What is true? A large molasses vat? What do I make of it, her courage, her short life? Young as she was, Impi had left her family, and everything she knew, to come to live in Minnesota. Her story inspires all the paper weaves. The paper yarn I weave was made and purchased in Tampere. In the weaves of this series, the paper is eggs, or blossoms, or bows on gifts. The burst is the transformative power of imagination, the ability to envision something that doesn’t exist yet. The windows in the lattice weave, even a similarity to a window curtain, lets air and light move through the piece. Woven on my 2 harness barn loom, built by Norwegian American immigrants in Wisconsin, I make these window weaves, portals to other lives, other times, to memories that are not my own, but are in my imagination. 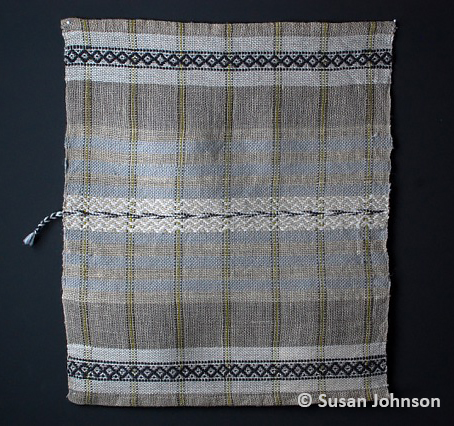 On the same trip to Finland with my mother in 2004, we took a midsummer sauna with her cousins. There was an old savu, or smoke sauna on the property, though it wasn’t heated, that day. We went inside. It smelled like a smoke house, but no strongly, but was blackened completely, inside, on every surface. It was pitch dark, except for a few streaks of day light that showed through from missing chinks, and around smoke window. I touched the surfaces with my hand, wondering if something would rub off, but it was a patina, and my hand was clean. I saw linen cloths laid on those benches, and the idea to make cloths for sauna took hold of me. I like to make common, funtional textiles that also hold meanings. The wash cloth carries many meanings for me. My savu sauna cloths series of samll weaves merged into more ornate cloths, which began to call crying towels. Each towel is numbered, and named. The name of some repeat, but he numbers are consecutive. This towel is one of Susanna crying towels, titled for the folk song, Susanna, Don’t You Cry For Me. They reference the universality of loss, sorrow and griefs, both large and small, that we experience as human beings. I weave these with a light heart, and don’t mean them to be maudlin, but to acknowledge the complexity of our emotional lives. No one cries alone. 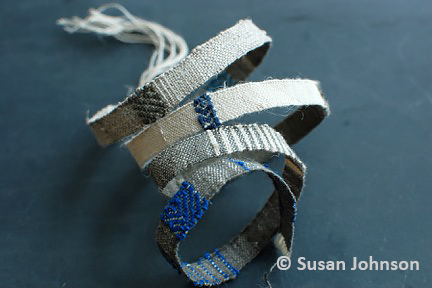 I wove the first tape on leftover warp on my floor loom. I used takes as utilitarian pieces for straps, bookbinding, or trims on some upholstered cupboards I made. There were many uses, and I woven them in different widths, and lengths. I knew the Saami wove tapes to tie bundles to the inside of tents, and about tape weaving Scandinavia and worldwide, as a common, functional and decorative textile.

I use a cloth tape measure every day, and struggle to find exact measurements with weaving that is one length on the loom, another off, and another when it is washed. I have a conflicted relationship to the concept of measure. As a child I was given the idea that if a thing can’t be measured, it doesn’t exist. But I know things do exist that are difficult, if not impossible, to measure.

I realized what I was weaving was a different kind of tape, a tape without measure. Rune calendars intrigued and mystified me with their enigmatic markings on wood and bone. We surmise their meanings, and may even know the system of the markings. We no longer need those markers, because they are aligned to a time and culture that is past. In deep time, all of these meanings will fade, and be forgotten, the marks will remain, through not their significance.

In my tape, I include arbitrary, and more ephemeral measurements, my true waist size, the length of my cat’s tail, the height of a morel mushroom. One night, a dog was barking across the rive, near midnight while I was weaving. I wove one blue thread across each time it barked in 5 minutes. I recorded the widths of the bands of wooly bear caterpillars and woven them in, what some believe predicts a harsh or mild winter to come. I have kept a log of these measurements to use in subsequent tapes, and I add new measurements as I think of them. My tapes without measure are variable lengths and widths.

Born in St. Pau, Mn in 1951, I have lived my life in the region of the Great Lakes states. I’ve lived near the Mississippi River in SW Wisconsin for the last 35 years. I am a self taught weaver, and have been weaving since 1981, when my eldest daughter was born. My mother is first generation Finnish American, whose father was born in N. Sweden at the arctic circle, and whose mother was Finnish. My father is second generation, whose grand parents were Swedish Finns.