2014 is an awesome year to be Finnish-American! Having Finnish ancestry or being any related Scandinavian cousin is always wonderful, but this year is very special as it marks the 150th year of the start of Modern Finnish Migration to North America. So what’s different about 1864—certainly other Finns settled in the New World prior to then. Part of the telling is in the documented history and accounts that show early immigrants intended to come to America and form Finnish communities in the New World. This small group of Finns became the starting point for the Modern Migration and they came primarily to Michigan and Minnesota where most were either farmers or miners. The broad geographic swath across northern Minnesota to the Upper Peninsula of Michigan is called the Finn Hook. 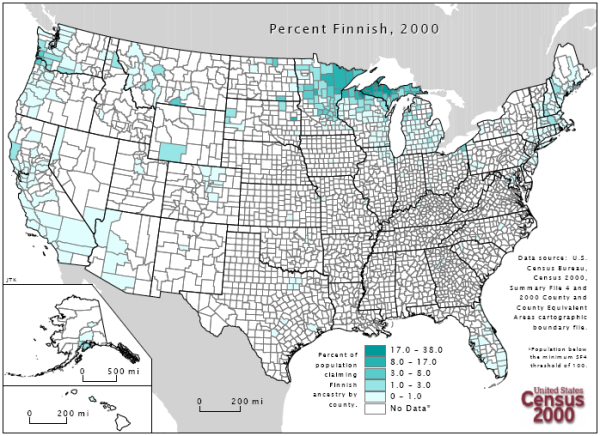 The big celebration of Finnish heritage is an annual summer festival called FinnFest. This year the event is held in Minneapolis, but FinnFest has been held in other cities and communities with connections to Finnish-American heritage, too. To honor this grand 150th sesquicentennial, there are concerts, performances, exhibitions, lectures, films, dances and other amazing ceremonies for six months from May to November, 2014. FinnFest itself is held August 6-8, 2014. Here’s a link.

Finland is a country with a proud textile heritage and whose contemporary design aesthetic boasts household names such as Marimekko, Toikka, and Iittala with their remarkable cadre of designers. And of course thinking of all things Finnish, (even though it’s not a textile, but just as important) the sauna! There are some special textile exhibits that are taking place this summer to honor the 150th anniversary. Exhibits have a variety of purpose; sometimes to share the past so as not to forget, or to become individually inspired or to provoke action; but overall exhibits make viewers aware of something much bigger than themselves. They are visual stories. The American Swedish Institute (ASI) is exhibiting a collection of Ryijy rugs, some of which are over 300 years old. Dr. Tuomas Sopanen is Finland’s foremost collector, putting together an array that shows primitive functionality to contemporary design and art. ASI Exhibit link 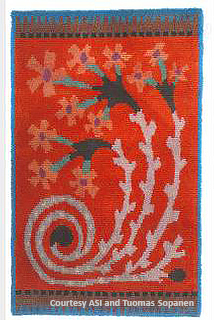 This exhibit is possible through the dedication and professional work done by ASI and Finnish-American fiber artist Anita Jain. Anita is the founder of Common Strands which seeks to promote international cultural exchange of traditional and contemporary fiber art. This is one of several events she is coordinating with ASI, the Textile Center, the Hennepin History Museum and Christ Church Lutheran in Minneapolis throughout 2014.

Anita is from Finland and moved to the US as an adult and as is her custom, she visits Finland for a month or longer each summer. During her 2012 trip, Anita met Dr. Sopanen for the first time and started a conversation regarding an exhibit commemorating the 150th year of the Finnish migration to the States. She then approached ASI with compelling rationale to host this exhibit. Well done, Anita! ASI and Anita have collaborated and planned a hand full of interesting talks, encounters, film screenings and even a sauna event with “The Living Tradition of Ryijy—Finnish Rugs and their Makers” as the focus. The exhibit is open through November 2, 2014. 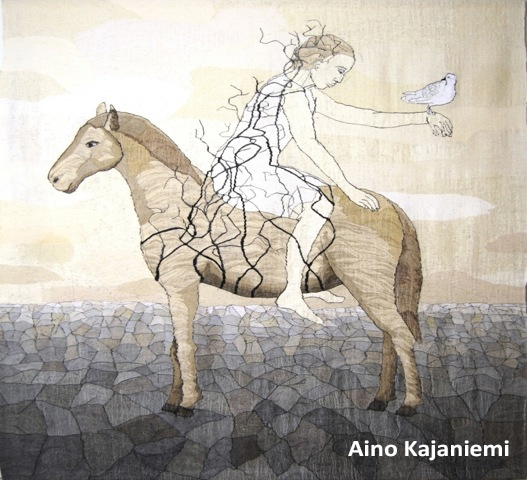 In June, the Textile Center is hosting an exhibit with work from Aino Kajaniemi. Ms. Kajaniemi is a Finnish tapestry weaver who tells stories of everyday life, ideas that are close to the moments and feelings of a human being’s life. Her story is called Dreams and Memories and begins on June 12 with an opening reception and Artist Talk and goes through August 16th. Dreams and Memories Ms. Kajaniemi will also give a presentation about her liturgical weavings that have been commissioned by churches in Finland. The talk will be held Sunday, June 15th at Christ Church Lutheran in south Minneapolis. Aino Kajaniemi Liturgical Talk

Common Strands has also organized a jazz guitar concert with up and coming Finnish guitarist Olli Hirvonen. He and his band which includes bass player Marty Kennedy and Nathan Ellman-Belle on drums. The concert is on May 28th. Tickets are $13 and can be purchased here. Olli Hirvonen Trio concert

All the events are listed on the Midwest Fiber Arts Trails Happenings page. Happenings!