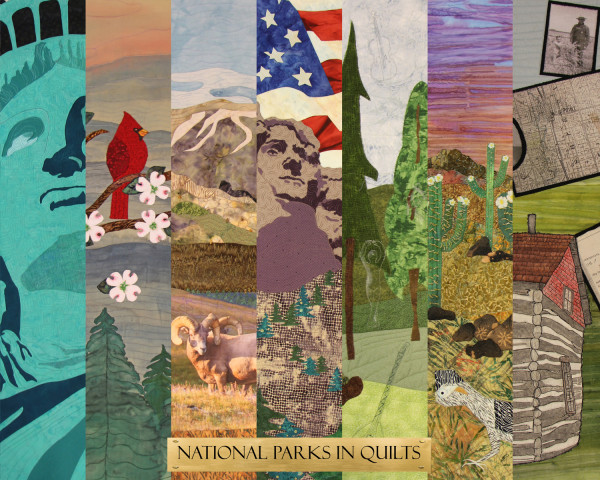 See all thirteen quilts and their stories here!

“The National Park system is a gift to all Americans. For one hundred years places of historical significance, structures of great merit and many of the natural wonders of our country have been preserved and protected. The National Park system is a symbol of what it means to be an American. We each felt moved by our chosen park or monument to design a piece of fiber art to represent it. We hope others will enjoy viewing the pieces we have created from our hearts” stated Cynthia Levis of Fiber Works.

The schedule for this exhibition can be found on the National Parks website. Quilt enthusiasts and all visitors will be able to Find Your Park through this unique exhibit. This exhibit runs through December 31, 2016. Here’s the short list, click below for more details.

The quilts will travel to the following parks:

“Quilting has long been a mainstay of self-sufficiency;homesteaders had to take advantage of all of their resources. Yet they found ways to make recycled products beautiful. Today quilting isn’t as much about recycling, but has grown into an amazing art form, incorporating modern and traditional techniques. Homestead is honored to have inspired one of these creations,” said Superintendent Mark Engler.